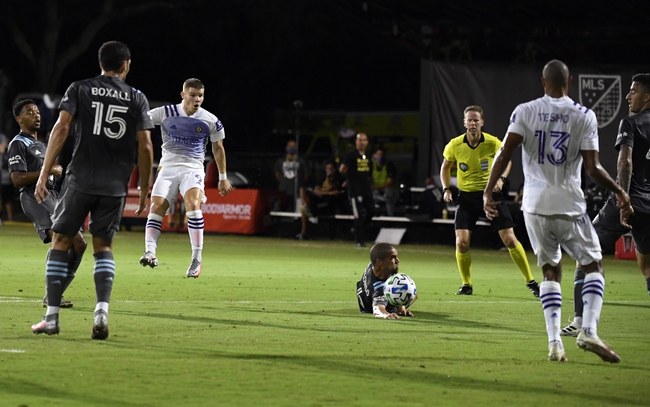 Portland Timbers and Orlando City SC meet Tuesday night in the final of the MLS is Back Tournament soccer action at the ESPN Wide World of Sports Complex.

Portland Timbers are coming off a 2-1 win over the Philadelphia Union where they struck early and hung on to a 2-0 lead late in the second half. Portland Timbers only controlled the ball for 38.7 percent of the match, but they managed 15 shots total and seven of those shots were on target. Portland Timbers showed once again they can win games in a variety of different ways and it’s the second straight match they’ve won despite getting dominated in ball possession. Portland Timbers have now scored at least two goals in five of their last six matches. Diego Valeri leads Portland Timbers with three goals, Sebastian Blanco has three assists and Jeremy Ebobisse has four shots on goal. Defensively, Steve Clark has allowed seven goals on 19 shots faced.

Orlando City SC is coming off a convincing 3-1 victory over Minnesota United FC, a match where they took a 2-0 lead into halftime. Orlando City SC controlled the ball for 49.8 percent of the match and while they allowed 17 total shot attempts, only three of those shots were on target. Orlando City SC hasn’t lost a match since March 7 and has been in control of ball possession for majority of this tournament. Orlando City SC has allowed one or less goals in each of its last six matches. Chris Mueller leads Orlando City SC with four goals, Nani has two assists and Tesho Akindele has two shots on goal. Defensively, Pedro Gallese has allowed five goals on 18 shots faced.

Orlando City SC is 3-1-1 all-time against the Portland Timbers, and they have the edge in goals scored, 10-7.

Orlando City SC should be favored in this match because of the depth they have offensively, they usually control the ball possession and they're pretty much at home. It's no surprise at all to see Orlando in the final given that they're used to the weather conditions and the humidity that comes with Florida in the summer time. However, we've been backing the Portland Timbers this whole tournament and they've done nothing but reward us. A scrappy bunch that makes the most of their possessions and has probably the MVP of the tournament if they win in Sebastian Blanco, who has set the tone for this club up to this point.

It's worked this far. The Portland Timbers are champions of the MLS is Back Tournament.