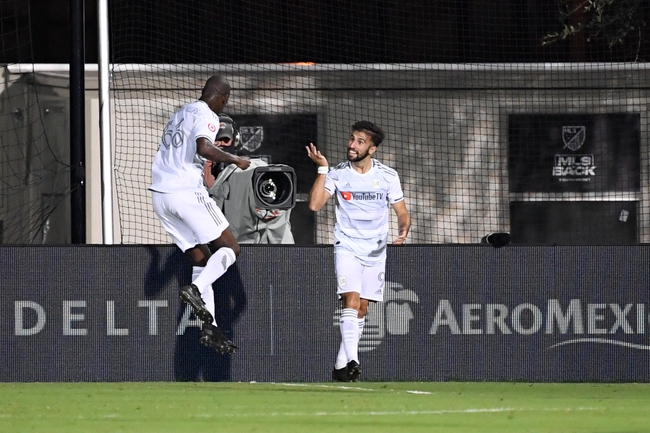 LAFC lost in the quarterfinals to Orlando City SC of the MLS is Back, but they showed just how talented and scary deep this club is on the offensive end. Diego Rossi was the player of the tournament, and LAFC has scored a combined 16 goals in their last five matches overall. There’s no team in the MLS like LAFC, as they find the back of the net with regularity and it’s a reminder they’re never out of a match. Diego Rossi leads LAFC with six goals, Latif Blessing has four assists and Carlos Vela has six shots on goal. Defensively, Kenneth Vermeer has allowed six goals on 17 shots faced and Pablo Sisniega has allowed four goals on six shots.

LA Galaxy has been on the losing side in three of their last four matches, and they have yet to win a match this season. LA Galaxy is coming off a 1-1 draw against Houston Dynamo last month. LA Galaxy has been dealing with offensive issues, as they’ve been held to one or less goals in each of their last five matches. With expectations high for this club every year, it’s safe to say LA Galaxy needs to hit the ground running to turn things around. Cristian Pavon leads LA Galaxy with three goals, Gordon Wild has one assist and Emil Cuello has two shots on goal. Defensively, David Bingham has allowed 11 goals on 28 shots faced.

LAFC is 2-1-2 in the last five meetings against the LA Galaxy, which includes victories in the last two meetings. The most recent match was in July of this year, a match LAFC won 6-2. Each of the last four meetings have produced at least five goals.

We have a disappointing team in the LA Galaxy that can't score goals going up against an LAFC squad that seems to be putting up crooked numbers whenever they take the field. LAFC has dominated the last two meetings against the Galaxy, which includes a 6-2 victory in the MLS is Back Tournament. Form can change after a month off for these clubs, but based on what we've seen the last time these clubs played, you should expect a LAFC victory.

Give me LAFC and the spread for added value.