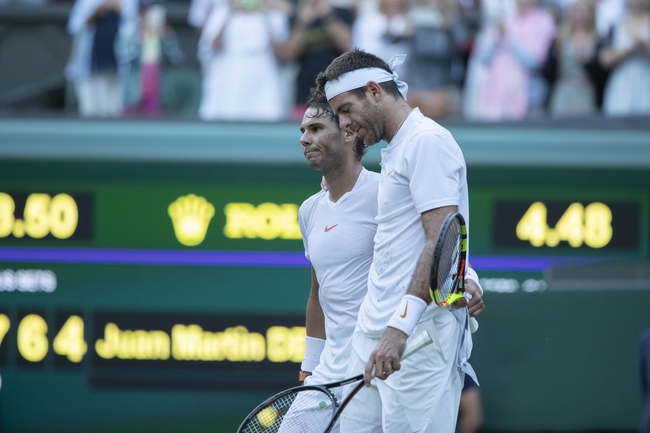 Juan Martin Del Potro and Rafael Nadal meet in the semifinals of the 2018 tennis US Open.

Juan Martin Del Potro is coming off a four sets win over John Isner that took 43 games to decide. In the victory, Del Potro won 89 percent of his first serve points and 64 percent of his second serve points. Del Potro won 80 percent of his total service points, saved all three of his break points and hit 49 winners to just 14 unforced errors. It was just a flawless performance from Del Potro overall, and he’s now won 15 of 16 sets this tournament. Del Potro is playing some of the most consistent tennis we’ve seen from him in years, and he has to feel this is finally his chance to end the grand slam drought. As long as Del Potro can keep hitting with the pace he’s hitting with, he gives himself a real shot to win the title. Del Potro has a chance to make his second career grand slam final and first since the 2009 US Open. Del Potro is 1-4 in career grand slam semifinal matches. Del Potro has won 10 of his last 12 matches on hard court.

Rafael Nadal is coming off a five sets win over Dominic Thiem that took 54 games to decide. In the victory, Nadal won 67 percent of his first serve points and 56 percent of his second serve points. Nadal won 63 percent of his total service points and converted on five of his 17 break points. Nadal hit 59 winners and 49 unforced errors, something I’m sure he’ll look to clean up heading into this semifinal match. Nadal has played about 13 hours of tennis in his last three matches, so conditioning will be the topic of conversation for the Spaniard. Either way, Nadal has shown in this tournament that he still has it at 32 years old and is still more than capable of digging deep and simply finding a way to win even if he may have been outplayed. Nadal hopes to make back-to-back US Open finals and his fifth grand slam final since the start of 2017. Nadal has won 16 of his last 17 grand slam semifinal matches. Nadal is 4-2 in US Open semifinal matches. Nadal has won 10 straight matches on hard court.

These two have played 17 times and Nadal has won 12 of those matches. The most recent meeting was in this years Wimbledon, a match Nadal won in five sets. Nadal has won the last three matches against Del Potro, and his last loss was in the 2016 olympics. These two have split their previous two meetings at the US Open, with Del Potro winning in 2009 and Nadal winning in 2017.

Conditioning won’t be an issue for Nadal considering he gets two days off before this match. Nadal is a machine physically, so giving him that much time off is a major advantage. There’s no question Del Potro is playing some of the best tennis of his life, but the head to head numbers speak for themselves here and Nadal just has that it factor that can’t be explained. When it’s time to dig deep in a competitive match, Nadal simply finds a way to come out on top more times than not. Del Potro won’t be able to hit through Nadal like he has previous players and if this match was to go four or five sets, I don’t trust his big body holding up.

Nadal reaches the final of the US Open back-to-back years.