Who Has Won The Most Wimbledon Titles In ATP Tennis History? 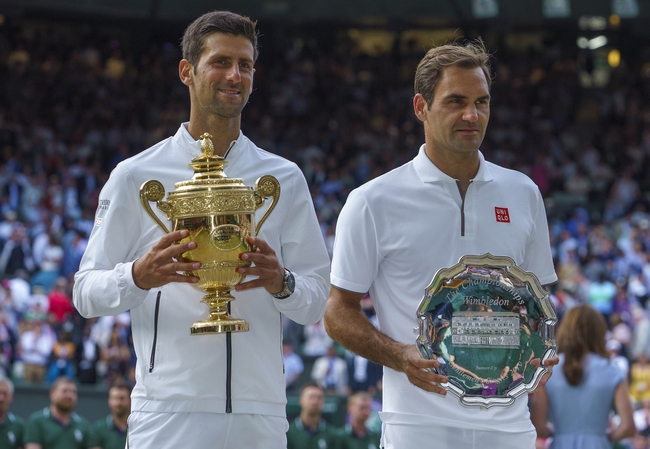 The Players With The Most Wimbledon Titles On The Men's Side

The Wimbledon is one of four majors in tennis and one of the tricker ones given that grass season isn’t that long, so there’s a small group of players who consistently have success on this surface. Wimbledon started in 1877 and there’s only nine players who have won this tournament at least four times.

Here are the men who have won the most titles in Wimbledon history.

1. Roger Federer, eight titles - Roger Federer won Wimbledon five straight years from 2003 to 2007, and it’s his most successful grand slam with an 89 percent winning percentage. Federer is 8-4 in final appearances at Wimbledon.

2. William Renshaw, seven titles - William Renshaw not only has won Wimbledon seven times, but he holds the record with six straight tiles from 1881 to 1886. Renshaw was 7-1 in career final appearances at Wimbledon.

2. Pete Sampras, seven titles - Pete Sampras was a perfect 7-0 in final appearances at Wimbledon and won 90 percent of his matches in this tournament overall. Sampras was 40-2 in matches played on Centre Court and 63-7 in matches at the All England Club. Complete dominance.

4. Novak Djokovic, five titles - Novak Djokovic is likely going to move up on this list considering he’s won Wimbledon the last two years, but for now he’s 5-1 in final appearances here and is winning 88 percent of his matches overall. When Djokovic won his Wimbledon title in 2011, he became the top ranked player in the world for the first time.

4. Bjorn Borg, five titles - Bjorn Borg won all five of his Wimbledon titles in a row from 1976 to 1980, and his 92.7 percent winning percentage is a tournament record. Borg also has a record of 41 straight victories at Wimbledon.

7. Reginald Doherty, four titles - Reginald Doherty won his four Wimbledon titles from 1897 to 9000, and eight of his 10 doubles grand slam titles came at Wimbledon. Born in Wimbledon, London, Doherty was one of many British players who have had a great deal of success at this tournament.

7. Anthony Wilding, four titles - Anthony Wilding won his four Wimbledon titles from 1910 to 1913, and he had a potential five peat snapped by Norman Brookes in straight sets. Four of Wilding’s six grand slam titles came in the tournament and four of his five grand slam doubles titles as well.

7. Rod Laver, four titles - Rod Laver won four of his 11 grand slam titles at Wimbledon and is one of only four other players to produce the career grand slam. Laver was 4-2 in Wimbledon final appearances, winning four straight after dropping the first two matches against Alex Olmedo and Neale Fraser.

The pick in this article is the opinion of the writer, not a Sports Chat Place site consensus.
Previous Pick
Who has the most French Open ATP Titles in History?
Next Pick
Who has served the Most Aces in a Tennis Match?