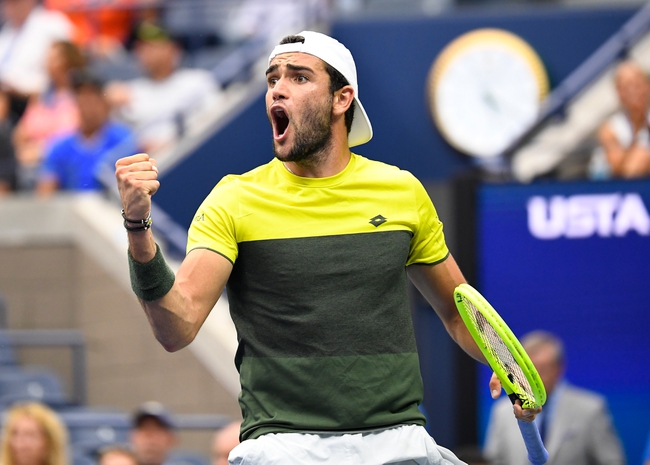 The final match of the second weekend of the Ultimate Tennis Showdown is here as Matteo Berrettini meets Benoit Paire in what is going to be an extremely fun encounter to watch. Who will come out victorious, the young Italian, or the veteran Frenchman?

Matteo Berrettini has been absolutely unstoppable here at the Ultimate Tennis Showdown and has shown us that he is going to continuously improve as a player. Berrettini has an amazing serve, a superb forehand, and has the power which allows him to destroy his opponents. Berrettini has so much potential and he is one of the favorites to win this tournament in the next 5 weekends. Berrettini will want to continue to build on his momentum that he has gained in his first few matches and if he is able to gain control of matches early, it is going to be hard for anyone to stop him.

Benoit Paire is one of a kind. The Frenchman is unstoppable when he is concentrated and on top of his game. However, he has not been like that as of late. Paire needs to concentrate on matches and he needs to ensure he is patient in his play as he sometimes just gives up on points when he does not see a quick point. Benoit Paire is one of the best trick shooters in the game, but if he is to be one of the best players in the game, he needs to ensure that he plays matches to win them, not just to win fun points.

This is going to be the first meeting between these two players and it is going to be an interesting encounter. Paire knows he can beat Berrettini if he actually plays his best tennis, however, he is not been doing that as of late. I see Berrettini's powerful serve, superb forehand, and amazing concentration to make this a one-way match. Berrettini will come out and take control of this match early, Paire might get one quarter out of him, but in the end, Berrettini will win this match 3-1.