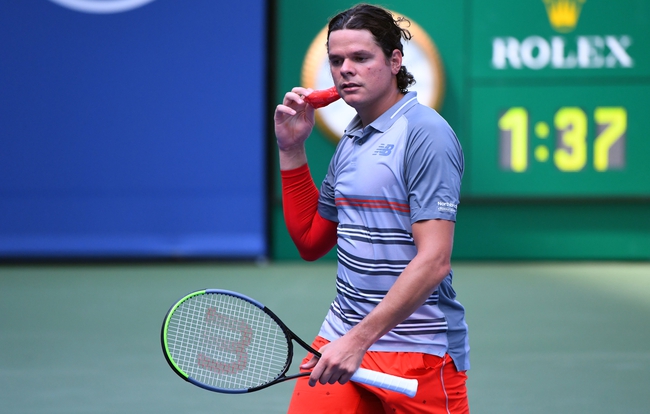 Milos Raonic and Novak Djokovic meet in the final of the 2020 tennis Western & Southern Open.

Milos Raonic is coming off a straight sets win over Stefanos Tsitsipas that took 22 games to decide. In the victory, Raonic won 90 percent of his first serve points and 58 percent of his second serve points. Raonic won 77 percent of his total service points and converted on his only break point. Raonic saved his only break point and hit 12 aces. Raonic has been a serving machine this tournament, piling up the free points and he’s won 10 of his last 11 sets. Raonic looks to win his first career Masters 1000 title and the ninth title of his career overall. Raonic is 0-3 in Masters 1000 final appearances for his career. Raonic has lost six straight final appearances, not producing a title since the 2016 Brisbane International. Raonic has won eight of his last nine matches on hard court.

Novak Djokovic is coming off a three sets win over Roberto Bautista-Agut that took 33 games to decide. In the victory, Djokovic won 69 percent of his first serve points and 42 percent of his second serve points. Djokovic won 57 percent of his total service points and converted on six of his 14 break points. Djokovic was able to grind his way back into the match every time it looked like he was out of it, and he produced 14 aces in the victory. Conditioning will be the main question for Djokovic heading into this match. Djokovic looks to win his second Cincinnati Open title and his 80th title of his career overall. Djokovic is 1-5 in Cincinnati Open final appearances. Djokovic has won 11 of his last 14 final appearances. Djokovic has won his last 11 matches on hard court.

These two have played 10 times and Djokovic has won every match, including the most recent meeting in this years Australian Open. Eight of the victories have been decided in straight sets.

Djokovic is likely going to be the favorite because he’s Djokovic, and the h2h is completely one-sided. However, there’s an opening for Raonic here with the way he’s serving and with far less wear and tear on his body. Djokovic is coming off a three hour match that included a lot of running, and he spent much of the final set constantly bending over and grabbing at his stomach. Less than 24 hours later, and this is a tough turnaround for even the best tennis player on the planet.

I’m leaning toward Raonic winning this match, and I like him even more at plus money.