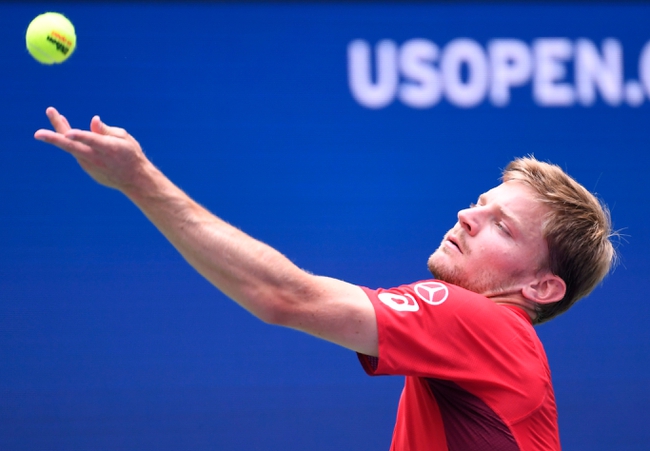 Lloyd Harris vs. David Goffin - 2020 US Open Second Round

Number 7 seed, David Goffin, meets Lloyd Harris in the second round of the 2020 US Open on Wednesday, September 2nd. Will Goffin continue his incredible form or will the young South African show us why he is to be feared on a tennis court?

David Goffin absolutely schooled Reilly Opelka on Monday in the first round, beating the tall American in 4 sets. Opelka is known to be a better version of John Isner and he is able to just play matches without being too afraid of his opponents returning his serve. However, Goffin is one of the best returners in the game, and having played a lot of competitive tennis over the summer, Goffin was ready to come out and play at his best here at the US Open. Goggin was quite consistent both on his first and second serve, winning 82% and 67% of points respectively. Goffin know faces a tougher returner in Lloyd Harris, but he will surely be confident to see this job through.

Lloyd Harris made easy work of Marco Cecchinato in his first-round matchup here at the US Open, beating the former Roland Garros semi-finalist in straight sets. Lloyd Harris is a tough player, with an incredibly strong serve. He has not developed as strongly as other youngsters such as Stefanos Tsitsipas, however, he is on a path to becoming one of the second-tier players in the ATP Tour. Harris has a bright future ahead of him, and it will be interesting to see how he fares against an experienced player in David Goffin.

This will be the first meeting between both players and this is going to be another David Goffin victory in my opinion. Lloyd Harris will have his chances here and there, especially as he is a better returner and baseline rallier than Reilly Opelka, however, his inexperience will stop him in the end. Goffin is prone to having ups and downs in matches at times, and therefore he will probably give a set away eventually. I would say Goffin to win this match, but if the odds are too short, perhaps Goffin to win in 4 sets seems like a good option.