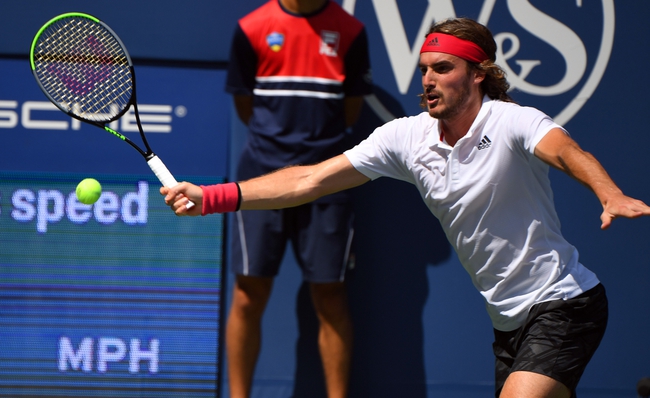 Maxime Cressy vs. Stefanos Tsitsipas - 2020 US Open Second Round

Number 4 seed, Stefanos Tsitsipa meets qualifier Maxime Cressy in the second round of the 2020 US Open. Will the Greek God continue his run of form or will he be upset by an up and coming American?

Maxime Cressy came through a hard-fought battle in the first round against Jozef Kovalik. Both players were giving it their all, and having their ups and downs, but Cressy managed to come through in a 4-set victory. Cressy was struggling behind his first serve the entire match, only winning 58% of first-serve points, however, he was very solid behind his second serve, winning 84% of his points. Cressy knows he was very lucky to have gotten away with such a victory as Jozef Kovalik is a much better player. Cressy will now need to significantly increase his game if he is to compete against the No.4 seed, Stefanos Tsitsipas.

Stefanos Tsitsipas had a very good week last week in the Cincinnati Masters, reaching the semi-finals. Tsitsipas should have won that match against Milos Raonic, but he was just unable to come clutch when it mattered. However, Tsitsipas started his US Open campaign with a solid straight-set victory against Albert Ramos Vinolas. Ramos Vinolas is not a player to take likely and Tsitsipas broke his serve 7 times, only allowing the Spaniard to hold serve for four games in 3 sets. Tsitsipas is the future of tennis in my opinion, and if he puts everything into improving his game and making sure he takes his chances when they come his way, he has a strong chance of winning the entire tournament over the couple of weeks.

This will be the first meeting between these two players, and it is going to be a meeting that Maxime Cressy will want to forget. Tsitsipas is just on another level from the American and he will end this match in a couple hours with no issue. Tsitsipas will come out, make sure he is improving his game and working on little aspects he might want to change and get this done in straight sets. Take Tsitsipas to win in Straight Sets.