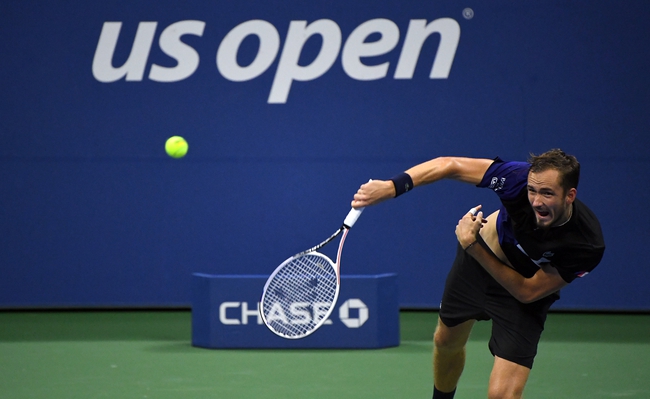 Christopher O'Connell vs. Daniil Medvedev - 2020 US Open Second Round

2019 US Open Finalist, Daniil Medvedev, meets young Australian, Cristopher O'Connell in the second round of the 2020 US Open. Will Medvedev continue to improve on his form to potentially reach the final again this year, or will O'Connell cause the upset?

Christopher O'Connell shockingly upset Laslo Djere in the first round here at the US Open in 4 sets. O'Connell is not a very well known player but after looking at his performance against Djere, he has a bright future on the ATP Tour. O'Connell will now face one of the toughest matches of his career as he comes up against Daniil Medvedev. The young Australian will have to ensure he gives it his all on every point here if he wants to stand a chance of making it to the third round of the 2020 US Open.

Daniil Medvedev was determined in his first round match here at the US Open to show everyone that he can keep his foot on the pedal for an entire match. Unlike last week at the Western & Southern Open where he really stopped trying too much in some of his matches, here at the US Open he gave it his all. Medvedev is one of the most unorthodox players out there and his return game is incredible. Medvedev beat Federico Delbonis in straight sets with ease on Tuesday and he will look to do the same here in his campaign to challenge for the title like he did last year.

This will be the first meeting between both players and unfortunately O'Connell it will be a swift Daniil Medvedev victory. Medvedev is determined here in New York and he will not give the young Aussie the chance to even grab a set here. Medvedev will give it his all from the get go and will show us that he was not just a fluke last year in his run to the US Open Final. The Russian's serve is incredibly strong and his return game is similar to Djokovic, he will make easy work of this. Take Daniil Medvedev to win in Straight Sets.