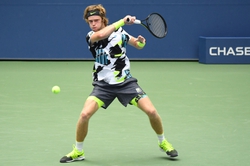 Andrey Rublev meets Hubert Hurkacz in the second round of the 2020 Rome Open in what is going to be a very fun match to watch. Will the Polish star out power the Russian young talent?

Hubert Hurkacz came through an extremely tough first round match against Dan Evans, beating the British No.1 in 3 tight sets. At certain points during that match it looked like it was neither players' match to win, but rather someone's match to lose. Neither player outperformed the other by much and it just came down to luck for who came through in the end. Hurkacz is a solid player but he needs to develop his game a bit further in the returning side if he is to become one of the best in the game. Hurkacz has a massive serve, a superb forehand, but he could work on his footwork at times. However, this does not mean he will not be a threat here against Rublev.

Andrey Rublev brushed aside Federico Bagnis in his first round encounter here in Rome, beating the Argentinian in straight sets. You could see that Rublev at times was trying to get a feel for the timing of shots on clay with that being his first match on the surface in a while, however, he was able to come through pretty easily. Rublev is just coming off a run to the US Open quarterfinals and I am sure he will be one of the main guys competing for big titles in the next year or so.

This is going to be the first meeting between both players and it is going to be an extremely fun encounter to watch. I expect Rublev to win this match due to his higher determination and overall better game, however, Hurkacz can definitely threaten him. Both players have big serves and massive forehands, however, Rublev's game is just better slightly in all aspects. I think Rublev will make it to the Round fo 16 here in Rome and win this match with relative ease when it comes down to it. Take Rublev to win.