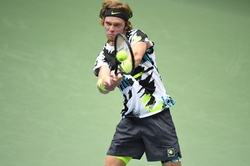 Roberto Bautista Agut has been very solid this week, beating the defending champion, Nikoloz Basilashvili, and Dominik Koepfer. RBA is one of the most consistent players on the tour and he is able to play extremely long and drawn out rallies to pull errors out of his opponents' game. RBA will be confident in his ability here against Andrey Rublev as sometimes the Russian is a bit impatient and will try to end the point quickly, causing him to his errors. However, he knows that he had a tough match against Dominik Koepfer, a similar player to Rublev, and that if he does not bring his A-game, he does not stand a chance.

Andrey Rublev just is one of the best young players out there in my opinion. Rublev has an incredible baseline game with his big swinging forehand and his solid backhand, and his serve is also extremely precise and strong. I expect many matches in the future to be on Rublev's racquet as he is one of the guys who can dictate play and push his opponents around the court if need be. Rublev is going to win big titles in the next year or two, so don't be shocked if he manages to pull one over the likes of Djokovic or other big players.

This is going to be the fourth meeting between both players, with Roberto Bautista Agut leading the head to head 2-1. I think it is going to be hard to go against Andrey Rublev here even with this losing record as he is just in the better form at the moment. I think the only danger Rublev faces here is if he is impatient in some of the long rallies which Roberto Bautista Agut loves to play. This is going to be a long quarterfinal, but if Rublev comes out to play, he should have this in his hands.