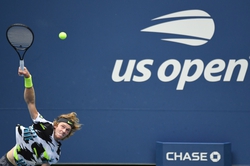 Andrey Rublev meets Casper Ruud in what is going to be an extremely tight semifinal match at the 2020 Hamburg Open on Saturday, September 26 2020. Will it be Rublev to make the final here in Hamburg two years in a row, or will Ruud show us that it is his time to shine?

Andrey Rublev put on an absolutely incredible performance against Roberto Bautista Agut in a match where many of thought the Spaniard ever had a good chance of winning, or of taking it to a final set. Rublev had no time for that and he just ran away with the match in straight sets. Rublev showed much more patience than we are usually seeing in his matches and I think that is what gave him the edge. If Rublev can make sure he is playing long rallies and not trying to hit a hard winner impatiently, he can expand his game to the next level I believe.

Casper Ruud came through a very tight quarterfinal encounter against Ugo Humbert, beating the Frenchman in 3 sets. Ruud did not have it all the way he wanted it to in that match until the third set I would say. Ruud has shown that he is a threat to a lot of players on clay over the last few weeks, but now he is meeting another powerful, quick-paced and motivated opponent in Andrey Rublev, will he be able to come through the way he did against Humbert, or will he be on a flight to Paris in the evening?

These two met last year in this same tournament for the first and only time they have played together. Rublev won that match in 3 tight sets and we all know he has made leaps and bounds since then. Both players have improved massively since last year and they know that if either of them is to come through this match, they need to make sure their level of play is at their best in order to make it to the Final here in Hamburg. I think Ruud is playing great at the moment, but I think Rublev is more motivated, more powerful, and the better player at the moment.