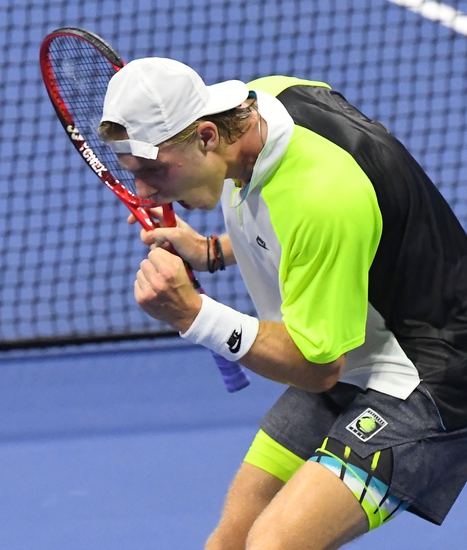 One of the most in-form players Denis Shapovalov kicks off his French Open campaign against local favorite Gilles Simon. The newest member of the "top ten club" will have a more difficult first round match than he would have hoped for in the wily French veteran. Now ranked number 53, he is clearly past his best but still cannot be discounted as he has been playing at a top level for many years. Can Simon pull off the upset with his methodical consistency?

Denis Shapovalov has been on a tear since the ATP Tour resumed. He won many fans over with his electric play at the US Open, losing a tough five setter in the quarterfinals to Pablo Carreno Busta. He proved that he can hang with the "big boys" on the clay in Rome with some solid results. He can feel unlucky to have lost in the semis to Diego Schwartzman having served for the match. "Shapo" is certainly more at home on the faster hard courts but he is primed to make a deep run here in Paris. Working with former top 10 player Mikhail Youzhny has done wonders for him and his maturity as a player.

Gilles Simon has long been at the top of French tennis, but is coming towards the twilight of his career. However he can never be discounted as he still is competing at a high level. He has won five ATP clay court titles and his experience still makes him a tough opponent. However, he enters Paris in poor form, having lost either in the first round or the qualifiers in his past three tournaments. He has a good serve and has always had success playing at home. Simon is definitely one of the more consistent players on tour and hopes to end his run of poor form here with a major upset.

Unfortunately for the local fans, I see this match going one way. While Simon has been a top competitor for many years and is a more accomplished clay court player than his opponent, Shapovalov is simply too dynamic and powerful for him to handle. Simon will try to stay in the match by hanging in and hoping that Shapovalov will make some of the careless errors that have plagued him in the past. However this is a much more mature Denis Shapovalov than in previous years and we expect him to come out and dictate play with his big serve and groundstrokes. He will be too much for the former world number #6 to handle. Shapovalov to win in straight sets.