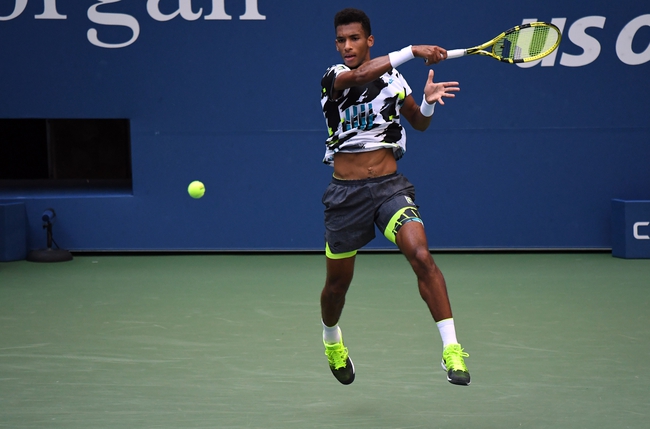 Next-Gen Superstar Felix Auger-Aliassime of Canada comes up against Yoshihito Nishioka of Japan. Neither player considers clay their favorite surface and their results have shown ths to be true. They have had much more success on the hard courts.

The Canadian who is ranked #21 has long been considered as a future star of thegame since breaking onto the scene a few years ago. He possesses a huge game and incredible athleticism but this has not translated into success on clay courts yet. He still has a lot of room to improve though, and does have the tools to be a force on this surface. He will be looking to dictate play early with his big serve and groundstrokes against an opponent with not many weapons. FAA's biggest enemy is usually himself as he seems to struggle with confidence and motivation at times. If he is able to keep it together and stick to his positive game plan he will like his chances.

The Japanese #2 and world #51 also is not fully comfortable on clay. He is a tricky opponent who plays solid defense and is very quick. His consistency is his main weapon, and on the slower clay courts he does not have many weapons that can hurt the young gun. His serve is relatively weak for a top player and FAA should be able to take advantage and break him quite regularly. He will have to use all the tricks in his book to be able to make a contest of this. However, if Felix is not at his best, Nishioka is the type of player who can take advantage. He rarely has bad games or beats himself so this will be a true test for the Canadian.

I am picking FAA to win this match. He is young and prone to careless errors, but he has the tools to overpower the Japanese player quite easily. If he can keep the errors down he should dictate play from early and dominate this match. Felix's biggest weakness lately is that he gets tight in close matches however this match shouldn't be a competitive one. FAA in straight sets.