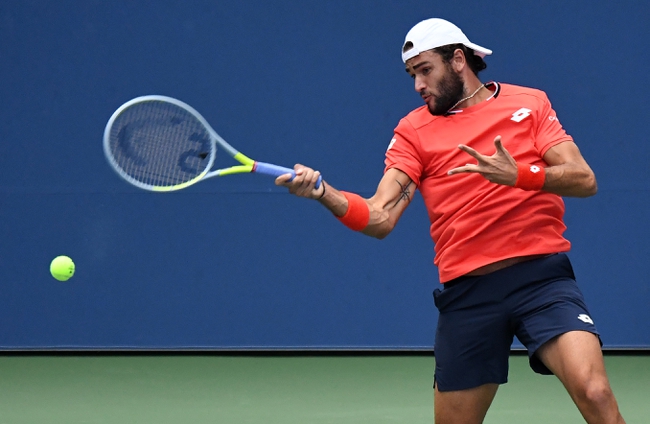 Seventh seeded Matteo Berrettini takes on German qualifier Daniel Altmaier in what is a true David vs Goliath clash in the third round of the 2020 French Open. Both men have had relatively straightforward paths to the third round. Does the young German have what it takes to cause an upset?

World number 8 Berrettini is in superb form at the moment. He had a great week in Rome, losing in the quarterfinals to eventual finalist Casper Ruud in three close sets. He has also cruised through his first two rounds without much concern. His main strengths are his serve and his forehand, which he uses to overpower opponents. If there is a weakness in his game it is his backhand. He seems to lack confidence on that wing and ends up slicing it often. He is expected to go deep into this tournament and will definitely be backing himself to come through this match without breaking much of a sweat.

The German qualifier also seems to be in good form. Ranked #186, it is a huge surprise to see him at this stage in the tournament but there is no denying that he deserves to be here. He reached the semifinals in a warm-up Challenger event right before Roland Garros, then followed it up with impressive wins over Feliciano Lopez and a huge upset over fellow German Jan-Lennard Struff. He will be bursting with confidence going into this encounter against the highest ranked opponent of his career. Like Berrettini, he has a big serve and will be counting on it to get many free points, keeping the pressure off of him and allowing him to focus on breaking serve which will be no easy task. If he serves well and attacks his opponent's backhand relentlessly he has a chance of keeping it tight.

I am picking Matteo Berrettini to win this match. The two players have fairly similar games in that they have huge serves and forehands. However one is ranked in the top 10 and one is ranked almost 200, so in scenarios like these you back the higher ranked player. I expect the first set to be close but once the Italian figures out the Altmaier serve he should win relatively comfortably. Berrettini to win.