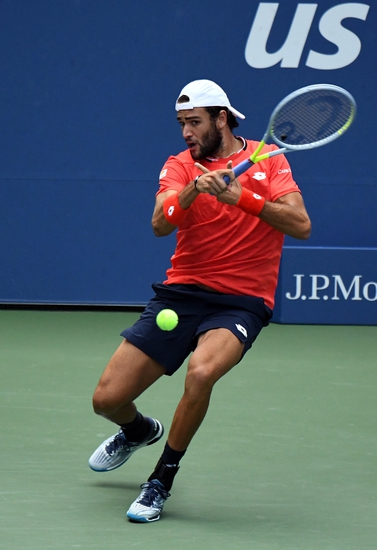 Seventh seeded Italian Matteo Berrettini faces Marcos Giron of of the United States in the Second Round of the 2020 Paris Masters. The match will take place on Tuesday November 3rd at approximately 2:50pm EST. This is the first meeting between the two players, will the Qualifier have what it takes to upset the Top 10 player?

Matteo Berrettini has not had a great season in 2020 by his high standards. He enters Paris having not played a competitive match in a month, having taken a break to allow his various minor injuries to heal. He is still in with an outside shot of qualifying for the 2020 ATP Finals so will no doubt be highly motivated to do well here. His main weapons are his big serve and forehand, and these courts suit his game very well. However, some major areas of concern are that he hasn't played in a while, as well as the fact that this is his first indoor hard court match of the season. Expect him to be rusty in the beginning before finding his bearings. Despite this, he still enters the match as the overwhelming favorite and will be pushing to win this tournament to boost his chances of qualification.

Qualifier Marcos Giron has been in the form of his life over the past few tournaments. He reached the Quarter-Final in Antwerp which propelled him to a career best ranking of #86. He followed that up with a good showing in the Qualifying Rounds before defeating the veteran Albert Ramos-Vinolas in the First Round. He is a classic counter-puncher, relying on his speed and defence to win matches. Against a flashy big hitter like Berrettini that is sure to be a solid tactic.

On paper this seems like a mismatch but given Berrettini's situation I think that he will be pushed here. Giron is a solid player and his consistent game style is sure to frustrate the big-hitting Italian who will likely make a slew of errors early on. However the gulf in quality between the players is so great that I believe he will be able to come through with the win in the end. Giron won't be able to keep up with the Italian once he gets going and Matteo Berrettini will come away with the win here.

The pick in this article is the opinion of the writer, not a Sports Chat Place site consensus.
Previous Pick
Paris Masters: Pablo Carreno-Busta vs. Jan-Lennard Struff 11/03/20 Tennis Prediction
Next Pick
French Open: Kiki Bertens vs. Martina Trevisan - 10/04/20 Tennis Prediction