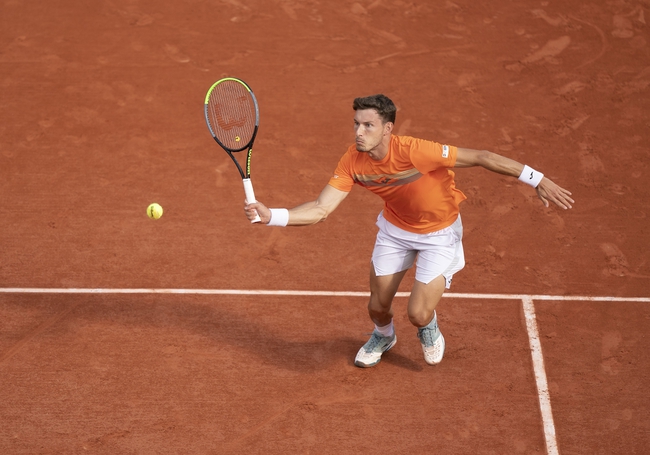 Ninth seed Pablo Carreno-Busta of Spain faces German Jan-Lennard Struff in the Second Round of the 2020 Paris Masters. The match will take place on Tuesday November 3rd, 2020 at approximately 1:45pm EST. This will be the 6th time they have faced each other and Carreno-Busta leads the head-to-head 3-2, however they have never played on indoor hard courts. Both players were impressive during their First Round victories, who will win and advance to the Round of 16?

Pablo Carreno-Busta has been having an outstanding season in 2020. He reached his first Grand Slam Semi-Final at the US Open and followed that up with a Quarter-Final showing at Roland Garros. He has been in indifferent form lately however, losing in the early rounds in his past three tournaments, including a shock loss to Kevin Anderson last week in Vienna. He will be very motivated to win here to make amends for that loss. As always, PCB will be relying on his elite footwork, speed and consistency to win here. One area that he has really worked on is his offensive game, and this improvement has been a big reason for his recent success. He was impressive in his First Round win over Hugo Gaston, a match that may predicted could have been tricky for the Spaniard. He won very comfortably, 6-3, 6-2 and will be confident of a victory here given the season that he has had.

Jan-Lennard Struff has had a disappointing season by his standards and will be looking to finish the season on a high. He has not made it past the Second Round in any tournament since the US Open, a shocking statistic for a player of his caliber. He was impressive in his First Round win over Nikoloz Basilashvilli, dominating his opponent from the baseline with his heavy and penetrating groundstrokes. Struff is an explosive player who is capable of beating anyone on his day, however struggles with focus at times. Now that his confidence is low it will be a challenge for him to find the motivation to compete here.

I predict that this will be a close and exciting contest. Either player can win but based on current form I am going to pick Pablo Carreno-Busta to win here. He is more consistent and in a better place mentally than his opponent and I expect those to be the determining factors. Pablo Carreno-Busta to advance to the Round of 16 here in Paris.