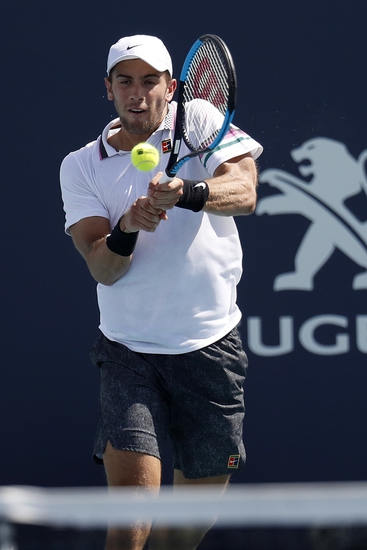 Fifteenth seeded Croatian Borna Coric faces Jordan Thompson in the Second Round of the 2020 Paris Masters in France. The match will take place on Wednesday November 4th, 2020. The pair has faced each other twice before, with Coric claiming both victories. Can Thompson win here or will Coric extend his head to head lead to 3-0?

Borna Coric has had an excellent season in 2020 since the restart. Long touted as one of the top young players, he has struggled with injuries and form over the past few years but finally seems to be living up to the hype. He reached the Quarter-Finals of the US Open and backed that up with a Finals appearance at the St. Petersburg Open. He is a very consistent counterpuncher, but has recently added some more weight to his shots which could be a key reason for his recent success. He will be looking to finish the year on a high note and should be considered a longshot for the title here in Paris.

Jordan Thompson has struggled this year. After breaking into the top 50 in 2018 big things were expected, but he has not found that same form for the past two seasons. Now ranked outside the top 60, he enters Paris in miserable form. After a great US Open run to the Round of 16, he has only won one out of his past six matches. He will be hoping for a deep run here but faces a mammoth task here against Coric. He played some solid tennis in his win over Federico Delbonis in the First Round, but Delbonis is strictly a clay courter, so not much can be gained from that result.

I am going with Borna Coric to win this match easily. Both players play similar styles but Coric is just better in all areas, plus he has a bit more power behind his shots which will be effective on these faster courts. I consider Coric to have an outside chance to win the title here and he will progress to the Round of 16 with a straight sets victory here.