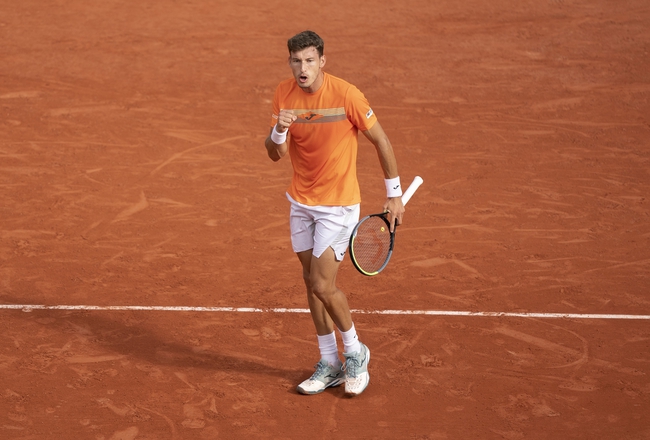 17th seed Pablo Carreno Busta faces German qualifier Daniel Altmaier in the fourth round of the 2020 French Open. The match will take place on Monday October 5th, 2020. It seems like a mismatch on paper but the German giant killer has been hugely impressive this week. Will he be able to pull off his fourth consecutive upset?

Pablo Carreno Busta is in top form at the moment and seems primed for another deep run at a major, after reaching the semifinals of the 2020 US Open a few weeks ago. He was very impressive in his third round win over Roberto Bautista Agut, playing extremely attacking tennis and not letting his opponent get comfortable. The Spaniard is now one win away from his career best performance at Roland Garros and will surely be delighted to be playing an inexperienced player at this stage of a Grand Slam. However he must not get overconfident as the German has shown that he can compete with the world's best. Carreno Busta has a great blend between attacking and defensive tennis and has many options in terms of game plans. He will definitely be backing himself to move on.

Daniel Altmaier has been having a dream week in Paris and even he surely did not expect to be in the fourth round of a major. The world number 183 has stunned much higher ranked players Feliciano Lopez, Jan-Lennard Struff and Matteo Berrettini to get to this stage and he will be believing that anything is possible. He has displayed superb attacking tennis but will have to take it up a notch higher to be able to defeat one of the most in-form players in the world at the moment. He is playing without pressure and total freedom and if he can manage to keep this up he will be in with a chance.

I expect Pablo Carreno Busta to win this match. The German has been very impressive and is definitely a better player than his ranking suggests but I don't think he has what it takes to compete with PCB. He is simply too versatile and will be able to change game styles depending on the situation. He is also not likely to give away as many free points as Berrettini and Struff did. Altmaier has the ability to keep it tight for a set or two, possibly winning one but the smart money is on a win for the Spaniard. Pablo Carreno Busta to win.