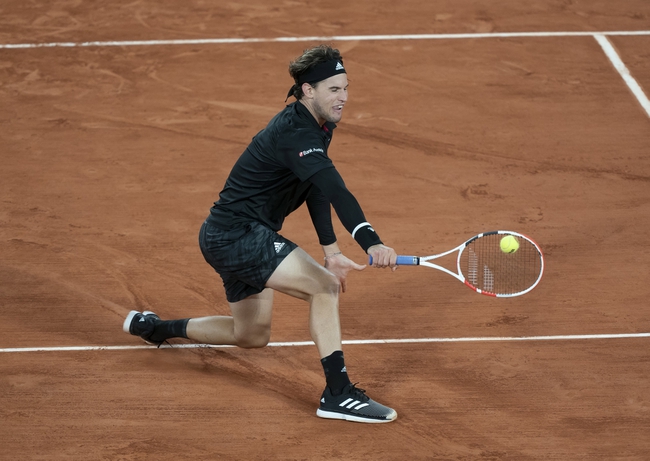 Third seeded Dominic Thiem takes on twelfth seeded Diego Schwartzman in a very intriguing quarterfinal clash at the 2020 French Open Championships. The match will take place on Tuesday October 6th, 2020. The players are very close players and know each other's games very well. Who will come out on top? Dominic Thiem leads the head to head 6-2, including 3-1 on clay.

Dominic Thiem came into Paris with supreme confidence after winning his first Grand Slam title at the US Open a few weeks ago. He has long been considered a title contender here in Paris and has evolved into a player who has proven that he is capable of winning any tournament on any surface. He was very impressive early on in the tournament, storming into the quarterfinals without dropping a set but had a huge scare in the last round, shockingly being stretched to five sets by French youngster Hugo Gaston. Thiem seemed to lose focus in that match and struggled to get his intensity up after blowing a lead but luckily was able to turn it around just in time. However he will not have that luxury against this particular opponent who is much more experienced than Gaston and will take full advantage of any slip-ups from the Austrian. Thiem will be looking to his powerful groundstrokes to assert his dominance against Schwartzman, and have him on the back foot as much as possible.

Diego Schwartzman is one of the most in-form players in world tennis at the moment. He made it to the final in Rome, defeating the King of Clay Rafa Nadal in the process, and has looked fantastic so far in Paris. He is a confidence based player and when things are going his way he is very hard to beat. He is prone to letting his concentration drop for stretches and he cannot do this here. Another glaring weakness is his serve. He always creates opportunities to break serve when receiving but can struggle to hold serve against the top players and Thiem will be looking to capitalize on this.

I am predicting Thiem to win this match. Schwartzman is certainly in the form of his life but it is almost impossible to bet against Thiem on clay unless he is facing Nadal or Djokovic. I can see Schwartzman stealing a set but don't expect Thiem to struggle mentally for two matches in a row. Dominic Thiem to win.