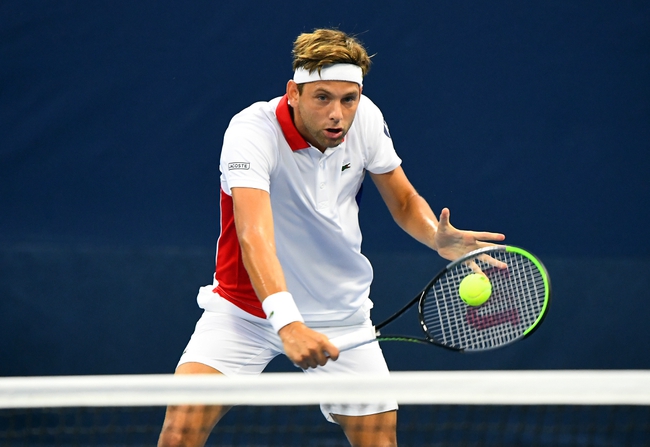 Fifth Seeded Serbian Filip Krajinovic faces American Steve Johnson in a First Round encounter at the 2020 Cologne Open. Johnson leads the head to head by 1 match to 0 but Krajinovic has had a much better year than his opponent. Can Steve Johnson rediscover his form of a few years ago when he was ranked #21? Or will the in-form Serbian come up with the expected victory.

Filip Krajinovic has been having an outstanding year. He is currently ranked #29 and reached his career high of #26 a month ago. After a string of good results he surprisingly lost in the First Round at Roland Garros so will be highly motivated to get back to winning ways. He has a 16-8 record in 2020 and has had impressive wins over Dominic Thiem and Novak Djokovic showing that he is truly ready to compete with the world's best. He is very solid on both wings but it is his return that is particularly impressive. He will be looking to break serve regularly and out hit his opponent.

Steve Johnson was once a top 25 player but has struggled lately with form and injuries. He has a 19-9 record in 2020 but most of those victories have come on the Challenger Tour. At his best he is a good player but we have not seen that type of form for a while and it has been a continual struggle for him. He still has strong groundstrokes but his serve has been letting him down lately, which could mean trouble against one of the best returners in the game. He will more than likely have to play his best match of the year to have a real shot of winning here.

I am going to pick Filip Krajinovic to win this match. He has had an outstanding year, and has had success on indoor hard courts throughout his career. He is simply the better player than Johnson at the moment, doing just about everything slightly better. He should be able to break serve consistently and overpower his opponent from the baseline. Filip Krajinovic to advance to the Second Round here in Cologne.