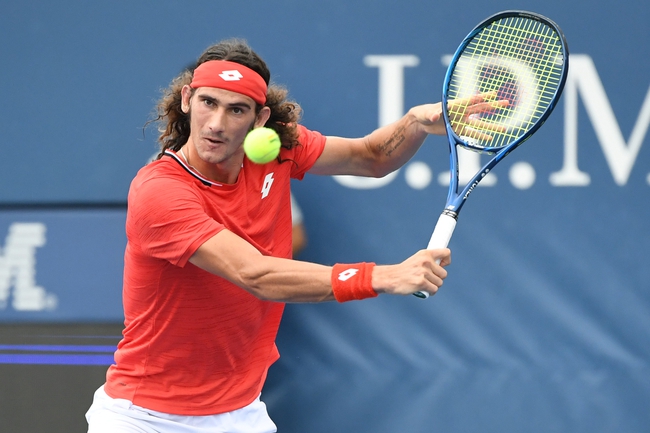 American Steven Johnson faces Lloyd Harris of South Africa in a Round of 16 match at the Cologne Open 2020 in Germany. Both men scored upsets in the opening round and will be backing themselves to advance to the Quarterfinals. Who will book their spot?

Steve Johnson has had a disappointing past few years with loss of form and injuries. He has seen his ranking slide from a career best #21 to #68 and will be hoping that this tournament signals his return to form. He had a very impressive upset win over Fifth Seeded Filip Krajinovic in the opening round and will be feeling very confident heading into this encounter. He actually lost more points than his opponent which shows his maturity and focus during the important points. He struggled with his serve at times, being broken twice and facing numerous break points so he will have to improve in that area to advance here.

His opponent Lloyd Harris came through the Qualifying Rounds and then defeated Kyle Edmund in the First Round. He was very aggressive in the match, blasting 8 aces and 40 winners. His serve is one of his main weapons and he will be looking to that to help see him through this match. He has had some impressive results this year, most notable reaching his first ATP final in Adelaide. He is known to be fairly inconsistent at times, with impressive results sprinkled in among disappointing results. There is no question that the talent is there but he just needs to put it all together.

I am expecting this to be a very close match and it is hard to call. However I am going with the talent of Harris to emerge victorious. Steve Johnson has been a shell of his former self and even though he was very impressive in the First Round here I think that these condition and courts suit Harris' powerful game. Lloyd Harris to win in three sets and advance to his second ATP Quarterfinal of 2020.

The pick in this article is the opinion of the writer, not a Sports Chat Place site consensus.
Previous Pick
Cologne Open : Hubert Hurkacz vs. Mischa Zverev - 10/14/20 Tennis Prediction
Next Pick
Sardinia Open : Tommy Paul vs. Marco Cecchinato Tennis Prediction 10/15/20