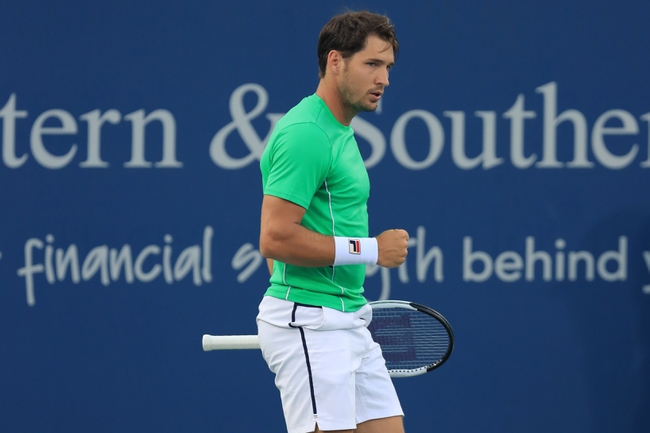 An all-Serbian clash awaits us in the Round of 16 of the 2020 Sardinia Open in Italy. The match will take place on Wednesday October 14th and will be on clay. Second seeded Dusan Lajovic faces Laslo Djere in what is sure to be an entertaining matchup. Laslo Djere leads the head to head by 2 wins to 1, however they have not played since 2015. Djere has had some improved results lately, but does he have what it takes to cause the upset over his second seeded compatriot?

Dusan Lajovic is a very accomplished player on this surface, as evidenced by his run to the ATP-1000 Monte Carlo Final last year. However he has not had the greatest results since. He has a 14-12 win-loss record on the season including 7-6 on clay but will surely feel that he is one of the top contenders for the title here in Italy. He is an extremely solid baseliner, dictating play with his powerful groundstrokes.

Laslo Djere is a talented but inconsistent player. He has had some outstanding wins on the surface over players like Diego Schwartzman this year but is prone to mental lapses and losing to lesser ranked players. However he has an ATP-500 title on clay from 2019 so he cannot be taken lightly. He had an impressive win in the First Round defeating Sumit Nagal 6-3, 6-1 so he is in good form heading into this match and will be confident in his chances of pulling off the upset. He also tends to struggle with his serve at times so he will need to rectify that to have a chance in this match.

I expect this match to be a close one, possibly going the distance. Even though they haven't played an official match since 2015 they still know each others' games very well and will try to use that to their advantage. While Djere is certainly capable of winning this match I think that Lajovic is just a little more consistent and mentally strong at this stage of their careers and he should come out on top in the end. Dusan Lajovic to win and advance to the Quarterfinals.