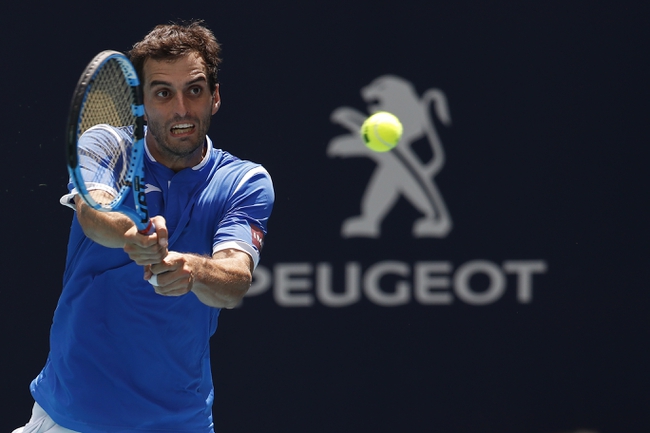 The No.4 seed here at the Sardinia Open, Albert Ramos Vinolas, meet Corentin Moutet in the second round on Thursday, October 15th 2020. Will Moutet put on another solid performance here or will Ramos-Vinolas come out firing with his experience?

Albert Ramos-Vinolas is far from the player he used to be. Although the Spaniard is seeded highly here, this is due to the lack of incredible competition to be found in this tournament. Ramos-Vinolas struggled both in Rome and at the French Open and he definitely needs to get some solid performances under his belt if he is to look like a threat against his opponents. Albert Ramos-Vinolas will be looking at his first match here and be very wary of the game that Corentin Moutet possesses. Moutet is a tough opponent and if Ramos Vinolas is not on top of his game here, he will definitely be looking to pack up his bags.

Corentin Moutet I am telling you now, is going to be a household name amongst tennis fans in the next few years. The young Frenchman has everything you need in a player, a sniper serve, a strong forehand, a great backhand, and solid movement. Mouter is still young and he has not had the luck that other youngsters have, but I am sure with more and more matches under his belt, Moutet can rise up the rankings and make a bigger name for himself. Moutet looked extremely determined in his first round encounter here, beating Frances Tiafoe in straight sets.

This is going to be the first meeting between both players and it is going to be a tight one. On one hand, Ramos-Vinolas possesses much more experience and is the higher ranked player, but on the other hand, Moutet is in better form and is more determined to make a name for himself in this stage of his career. Moutet should win this match in my opinion because he has had more solid games under his belt this year and he is extremely determined to prove to everyone that he is going to be one of the best in the world.