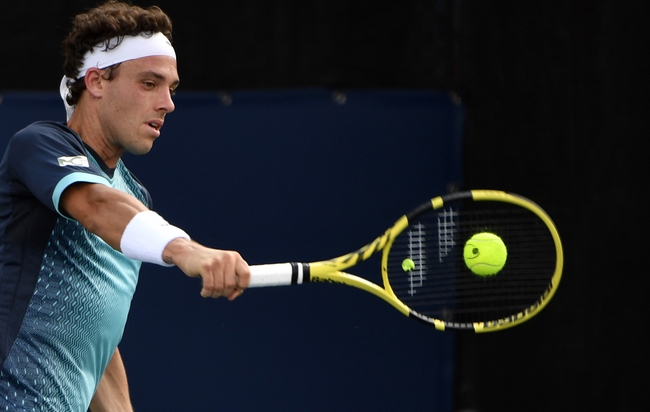 Tommy Paul vs. Marco Cecchinato - 2020 Sardinia Open Round of 16

Seventh Seeded American Tommy Paul faces Italian Marco Cecchinato in the Round of 16 at the 2020 Sardinia Open. The match will be played on Thursday October 15th, 2020.  Can the former French Open finalist regain some of his form of a few years ago to defeat the talented youngster who is ranked almost 50 spots ahead of him?

Marco Cecchinato sent shockwaves through the tennis world when he upset a number of top players (Including Novak Djokovic) to reach the Roland Garros Semifinals in 2018. However since then he went on to lose in the First Round in every Grand Slam until the 2020 French Open where he qualified and reached the Third Round. He will be hoping that that was the beginning of a career resurgence, having fallen outside of the top 100 in the rankings which is a far cry from his career high of #16 in 2019. He defeated compatriot Gianluca Mager in the opening round and would love nothing more than a deep run here in his home country. He has a 63% career win rate on the surface and will be confident in his ability to win here.

Tommy Paul is currently ranked #58, which is one spot off his career high. A former Junior French Open Champion, he has had some success on the surface throughout his career and has had a steady climb up the rankings over the past two seasons. He defeated Andrej Martin in a tough three setter in the First Round and will be backing himself to win here. Paul has an aggressive game and once he can keep his errors low he will have a good chance of winning this match.

Both players enter this tournament with mixed form and results. Cecchinato has the edge in experience and the greater clay-court pedigree but Paul has been the better player over the past two seasons. The Italian is definitely a much better than his current ranking (#103) suggests and I think that he will come away with a very hard fought win here. I am expecting this match to go to the distance and the more experienced player to come out on top in his home country. Marco Cecchinato to win.

The pick in this article is the opinion of the writer, not a Sports Chat Place site consensus.
Previous Pick
Cologne Open : Steven Johnson vs. Lloyd Harris - 10/14/20 Tennis Prediction
Next Pick
Sardinia Open : Lorenzo Musetti vs. Andrea Pellegrino Tennis Prediction 10/15/20