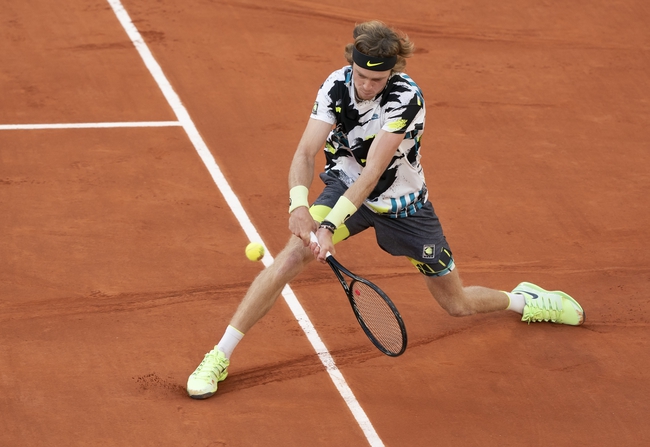 The favourite to win the tournament in my opinion, Andrey Rublev, meets up and coming Frenchman, Ugo Humbert in the second round of the 2020 St. Petersburg Open on Thursday, October 15th 2020. Will Ugo Humbert cause another upset against a Russian as he did against Daniil Medvedev at the Rome Open, or will Rublev continue to be one of the top playrs of the year?

Ugo Humbert came through a very tight match against Pavel Kotov, losing the first set 6-4 and eventually winning the next two sets 6-2/6-3. Humbert was not solid behind his second serve, only winning 52% of his points behind it. Humbert was really able to save himself by saving 6/8 break points. Humbert is a very solid up and coming player, but playing games like this will only cause issues further down the lines in tournaments where he meets tougher and tougher opponents. Humbert now meets probably the most or second toughest person here to play, Andrey Rublev.

Andrey Rublev was just superb in his first round encounter against Vasek Pospisil on Tuesday, beating the Canadian in straight sets. Many did not back Rublev to win that match and I was shocked. Pospisil is a very big swinger and can push opponents around, but Rublev has won the joint most titles on the tour this season with 4 and has the second most amount of match wins under his belt with 30 wins in 2020. Those number of wins are considered a great season in a normal year, let alone in a year where the season was stopped for nearly 5 months.

This is going to be the first meeting between both players and this is an easy prediction for me. Rublev is on fire at the moment and he knows that by putting in the work and winning big matches and going far in tournaments, he can achieve his goal of making the ATP Finals in November. Rublev is 10th in the rankings at the moment and he only needs to jump up one spot. Expect Rublev to win this match in straight sets and increase his chances of making the finals in London.