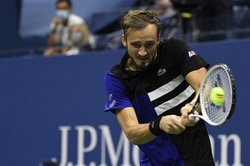 Reilly Opelka struggled in his firs round encounter against Serdarusic, losing the first set and eventually managing to win the next two as he outlasted his opponent. Opelka is a very good player, but in these situations it is hard to be completely confident in his game in the long term. Opelka has a massive serve, but if that is not firing, and if his opponents are able return his serve and move him around the court, he has issues due to his high stature and inability to play down low as much as he should do. Opelka will now face a very tough opponent who is one of the best returners in the game, Daniil Medvedev.

Daniil Medvedev was very solid in his first round encounter against Richard Gasquet. Medvedev lost the first set only because of one bad service game, but following that he was able to get his serve in control and eventually won the second and third set 6-3/6-0. Medvedev seems determined here in St. Petersburg to retain his title and show us all that he was not a one-season wonder. Medvedev is one of the best returners in the game and when he plays his best and focused on making the best shots, he is near unbeatable.

This is going to be the third meeting between both players, with Daniil Medvedev leading the head to head 2-0. I do not see this match ending in any other way other than a Daniil Medvedev victory. Medvedev is the better player and he is going to be able to take advantage of Opelka's weak return and rallying game. Both of these players have massive serves, but Medvedev has better groundstrokes and he is able to move his opponents around the court. Opelka can't handle that and he will eventually lose this match. Daniil Medvedev will book his spot in the quarterfinals.