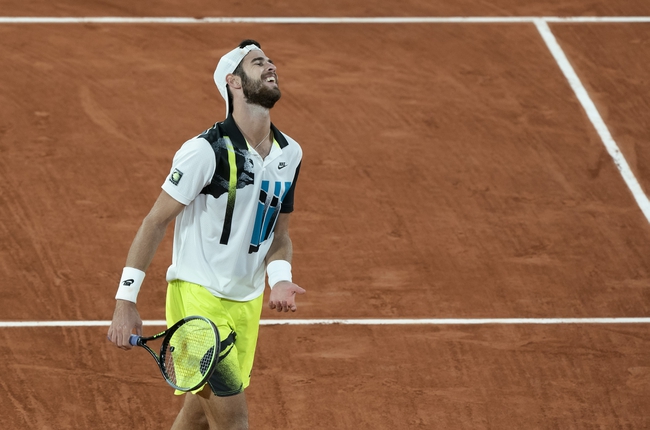 It is a battle of the Russians here at the St. Petersburg Open as Karen Khachanov meets Aslan Karatsev in the second round of the 2020 St. Petersburg Open on Thursday, October 15th 2020. Will there be a shocking upset here, or will Khachanov cruise through here as he did in his first round encounter?

Aslan Karatsev put on a solid performance against Tennys Sandgren on Monday, winning an extremely tight encounter 7-5/3-6/7-5. Karatsev was not the favourite coming into this match but he was able to remain in the match during the tight moments and eventually claim the victory. The Russian crowd's support really helped him I believe as Sandgren was not getting any momentum out of them. Karatsev will now have to get more than just the Russian crowd's support as he meets one of Russia's best players, Karen Khachanov on Thursday. Karatzev will have to play the game of his life here in order to survive.

Karen Khachanov cruised through his first round encounter against James Duckworth on Tuesday, beating the Australian in straight sets. Khachanov loves these conditions as he is a very solid player when playing on indoor hard courts. Khachanov has won some of his biggest titles in these conditions, specifically the Paris Masters 1000 in 2018. I expect Khachanov to come out here and know that he should be challenging for the title and cruising through his first few matches. Karen Khachanov can do this, but he just needs to find the consistency in his game and prove it to us.

This is going to be the first meeting between both players and it is not going to even be a contest. Aslan Karatsev is ranked 117 in the ATP rankins, however, he is nowhere near Khachanov who is ranked 17 and has been in the top 10 before. I expect Khachanov to come out here and put on a solid performance for his fans. Khachanov should win this one in straight sets as Aslan Karatsev does not have the game to beat him. Karatsev was solid against Sandgren, but this is a big step up in opponent.