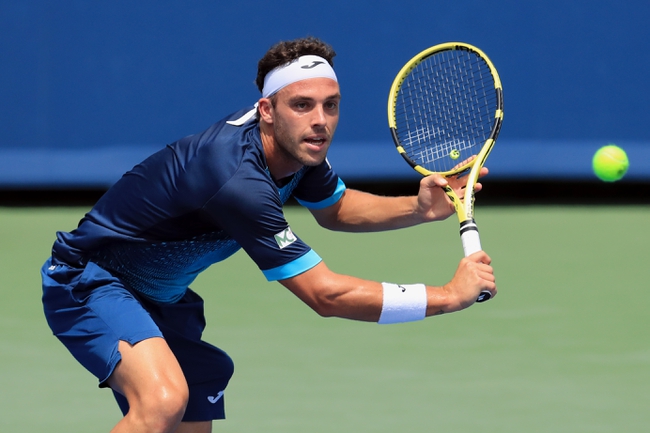 Fourth Seeded Albert Ramos-Vinolas of Spain faces Italian Marco Cecchinato in the Quarterfinals of the 2020 Sardinia Open. The match will be played on Friday October 16th, 2020. This match should be a close encounter between two clay court veterans. Ramos-Vinolas leads the head to head 4 matches to 1. Who will come out on top?

Albert Ramos-Vinolas is ranked number 45 in the world and has been a resident in the top 50 for many years. He has a wealth of clay court experience and can boast two career titles, and a highest ranking of #17. He had a very impressive 6-0, 6-3 win over the solid Frenchman Corentin Moutet in the previous round and will no doubt be confident after that victory. He has had a very inconsistent 2020 season and will be looking to make up for it with a deep run here. He is very solid on both wings and is an extremely consistent player who is difficult to beat on clay.

His opponent Marco Cecchinato has had a miserable past few years as evidenced by his ranking of #103 which is a far cry from a career high #16. He also has three clay court titles to his name proving that he is a much more dangerous opponent than his ranking suggests. He seems to be finding some form at the moment and will be hoping to finish the year strongly and get back into the top 50. He is a very good mover and possesses one of the best backhands on tour when he is in form. He will be confident of his chances of winning the title in his home country after an impressive win over the seventh seeded Tommy Paul in the Round of 16.

I expect a very close battle but I think that Marco Cecchinato will win this match. He has been struggling for a long time but seems to have gotten his mojo back at the right time. He is younger, faster and stronger than his opponent who has slowly been declining. Marco Cecchinato to win and advance to the Semifinals here in Sardinia.