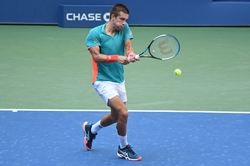 Reilly Opelka meets Borna Coric in the quarterfinals of the 2020 St. Petersburg Open on Friday, October 16th 2020. Will Opelka be able to back up his victory against the defending champion, Daniil Medvedev, or will Borna Coric get one step closer to making the final here again?

Borna Coric put on a solid performance in the second round against Saffiulin, beating him in straight sets. Coric is getting better and better with every match and he is definitely going to be confident coming into this quarterfinal, knowing he is the better rallier than his opponent. Coric will be glad he does not have to meet the person who beat him last year in the Final, Daniil Medvedev, and he will definitely be confident here to make it to the semifinals. Coric is one of the best players when he is on top of his game, he just needs to ensure he plays at his best level.

Reilly Opelka was extremely lucky in my opinion to come through this match and it is a bit of an undeserved victory. Opelka's game is not fun to watch as he does not have a solid return or rallying game and lives and dies by his serve. Opelka was able to ensure he won the big points on his serve and Medvedev just handed him the victory. Opelka is not going to win this tournament and his victory here was just a freebie handed by the defending champion. Opelka will find it tough here against Coric.

This is going to be the second meeting between both players, with Reilly Opelka leading the head to head 1-0. Opelka does not deserve to be here and Coric has looked much tougher to beat in this tournament. I expect this to be a tight match just because of Opelka's big serve, but at the end of the day Coric should have the advantage in the rallies. Borna Coric should make the semifinals here and potentially get the chance to reach the final for the second year in a row. Opelka would have to be handed the match again if he is to win.