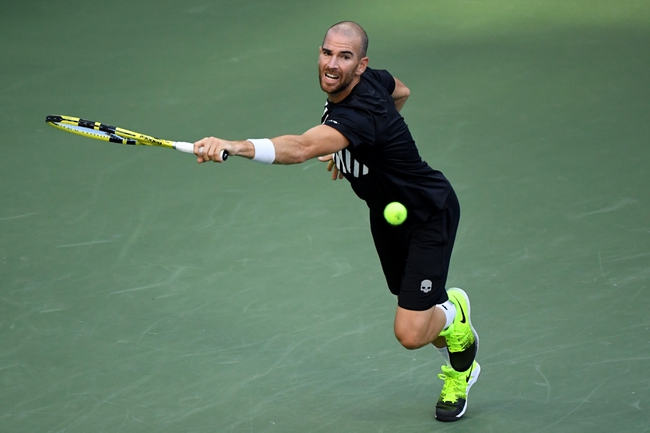 French veteran Adrian Mannarino faces Australian youngster Alexei Popyrin in the First Round of the Bett1Hulks Championships, which is the second consecutive ATP-250 event in Cologne Germany. The match will be played on Monday October 19th, 2020. Mannarino won the only previous meeting between the pair and will look to extend that streak with a victory here.

Adrian Mannarino is a highly experienced player that is currently ranked #44 in the world, and has a career high ranking of #22. He has had a very disappointing season, only winning four matches so far in 2020 and will be looking to revive his season with a good showing here. Mannarino is an incredibly steady opponent without any major weapons. He takes the ball very early which is an effective tactic on this surface. He has had some good results on this indoor surface during his career and will like his chances of victory here against the talented but unpredictable opponent.

Alexei Popyrin is touted by many to be a future star but has not lived up to his vast potential so far in his career. Like Mannarino he has had a disappointing season so far but unlike the Frenchman he has some matches under his belt here, having come through the qualifying draw. He also arrives in Cologne on the back of a Semi-Final run at a Challenger event in Parma, so he is the more in-form player. He possesses a huge serve and forehand and will look to blow his opponent off the court. Mannarino is extremely consistent so he will be a frustrating player for the young Australian to face.

I am going to pick Adrian Mannarino to win this match. He is in poor form and his opponent is very talented and can keep it close but I expect the Frenchman to be too steady for him to handle. He is a very annoying player to play against as he doesn't give many free points away. If Popyrin plays well he definitely has a chance of winning but I think that Mannarino will eventually advance to the Second Round here at the Cologne Championships.