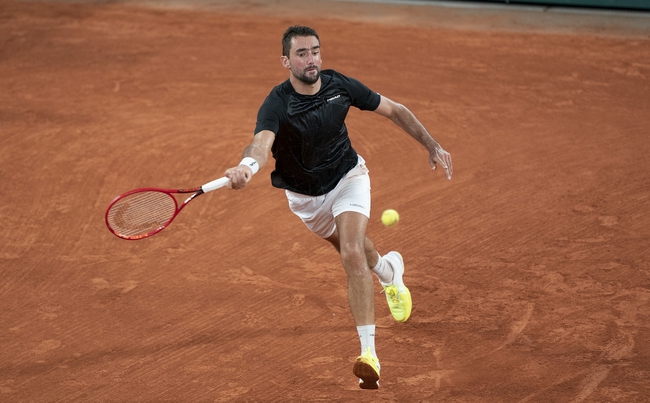 Marin Cilic of Croatia faces American Steve Johnson in the First Round of the 2020 Cologne Championships / Bett1Hulks Championships. The match takes place on Monday October 19th, 2020. This is a matchup between two players that have struggled in recent years and both will be hoping to turn their seasons and careers around with a strong showing this week. Who will advance to the Second Round?

Marin Cilic is a former Grand Slam Champion and top 5 player who has seen his ranking and form slowly decline over the past few years. Now ranked #40 he is a far cry from the player he once was but is still a very dangerous player when in form. He possesses a huge serve and forehand and is able to dictate play from the baseline, especially on hard courts. He comes into this event with mixed form, having lost in the Second Round here in Cologne last week. He leads the head to head by 5 matches to 0 and this will give him confidence heading into this match.

Steve Johnson is currently ranked 68 but like Cilic has seen his ranking decline. He was ranked as high as #16 a few years ago and hasn't been able to produce his best tennis in quite some time. He is a solid baseline player without many major weapons and will need to be at his best to have a chance at the win here. He had a very impressive win over Filip Krajinovic last week that will give him some confidence. His best chance of winning is to make sure he returns well and moves Cilic around the court often. He definitely has the game to be able to do well here but we haven't seen his best tennis for the past two years.

Marin Cilic is the clear favorite here and I expect him to win this match with relative ease. Both of these players have been struggling lately but the Croatian has more firepower and is the better player at this stage in their careers. Once he serves well and can limit his unforced errors he will win and head into Round Two here in Cologne.

The pick in this article is the opinion of the writer, not a Sports Chat Place site consensus.
Previous Pick
Antwerp Open: Dusan Lajovic vs. Frances Tiafoe 10/19/20 Tennis Prediction
Next Pick
Cologne Championships: Fernando Verdasco vs. John Millman 10/20/20 Tennis Prediction