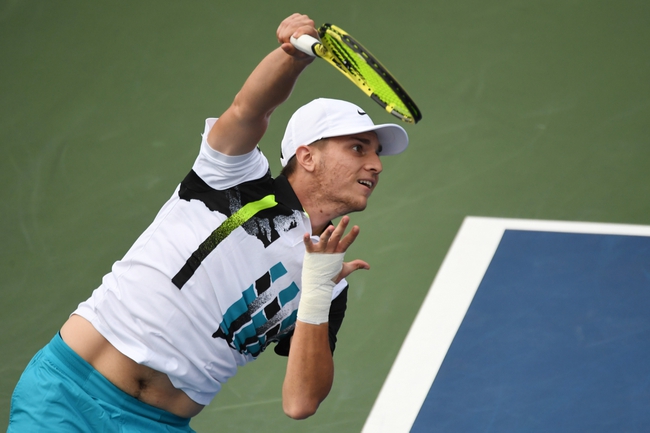 Miomir Kecmanovic of Serbia faces Sumit Nagal of India in the First Round of the 2020 Cologne Championships / Bett1Hulks Championship. The match will take place on Monday October 19th, 2020. Kecmanovic (#39) is ranked almost 100 spots above Nagal (#130) and will be expected to cruise through to the Second Round. Does Nagal have what it takes to cause the upset?

Sumit Nagal lost in the qualifying rounds but was selected as a lucky loser and entered into the main draw. He mainly competes on the Challenger Tour and this will be a big step up for him. He is a very attacking player, who has a very good flat backhand. He is comfortable at net too and can be a difficult player to beat on his day. However he has not been in the best of form lately so his chances of getting anything out of this match against a very good opponent appear slim.

Miomir Kecmanovic has had a successful year in 2020, winning his maiden ATP title in Kitzbuhel. He is a very talented young player and is expected to be a top 10 player in the future. He is an attacking player with a solid all court game, combining good footwork and consistency as the foundation of his game. However, he has been in relatively poor form since winning the title in Kitzbuhel with first round exits in Rome and Roland Garros. If he is able to remain focused he will be the heavy favorite in this match and will be backing himself to advance to the Round of 16.

I expect the young Serbian to win this match with relative ease. Nagal is a good player but in my opinion Kecmanovic is slightly better in every area. He is too solid and consistent for Nagal and I think he will wear him down and force numerous errors out of the Indian. Miomir Kecmanovic to win.