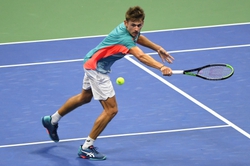 It is going to be an extremely tight battle in the second round of the 2020 Antwerp Open between Feliciano Lopez and Alex De Minaur on Wednesday, October 21st 2020. Will Lopez put on another solid display, or will De Minaur be able to show us an incredible performance as he did yesterday.

Feliciano Lopez put on a solid performance against Tommy Paul on Monday, beating the American in straight sets. I had written in my pick on that match that Lopez would be able to move Paul around the court and beat the American who was the odds favourite. Lopez still has lots left in the tank before he retires and he can beat big named players when he is on top of his game. Will Lopez be able to do this here in the second round as he meets Alex De Minaur who showed us his incredible strength and determination yesterday.

Alex De Minaur came through an incredible battle in the first round when he played against Richard Gasquet. Richard Gasquet had the match in his hands, having won the first set 6-3 and serving at 5-4 in the second set for the match. However, De Minaur did not let this happen and was determined to give himself a fighting chance. De Minaur was able to break back and win the second set in the tiebreak and then ran away with the final set. De Minaur, when on top of his game, can beat the best players in the world and he is definitely going to have a breakthrough season soon.

This is going to be the third meeting between both players, with the head to head standing evenly at 1-1. The last time they met was both in 2018 and both times on hard court. Lopez beat De Minaur in a very tight encounter, whilst when De Minaur beat him it was in easy fashion. I believe that since then Lopez's level has gone down, whilst De Minaur's has gone up. I believe that De Minaur will win this match because he has better movement and energy at this age and will book his spot in the quarterfinals.