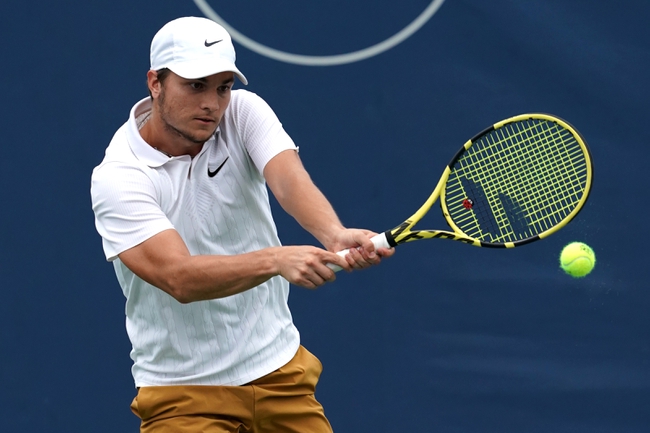 Eighth seeded Adrian Mannarino of France faces Serbian Miomir Kecmanovic in the Round of 16 of the 2020 Cologne Championships / Bett1Hulk Championships. The match will take place on Wednesday October 21st, 2020. The two players are ranked very to each other and it is expected to be a very close contest. Who will reach the Quarterfinals in Cologne?

Adrian Mannarino is an ATP Tour veteran but has been struggling for form recently. His First Round win over Alexei Popyrin was the first time he has gotten past the First Round in five tournaments so he will be hoping that win signals a change in fortunes for him. Despite his small stature he has had success on these indoor hard courts before and will be confident in his ability to defeat the relatively inexperienced Serbian youngster. He was dominant against Popyrin and will look to continue that strong baseline play. He is very good from the baseline but struggles with his serve at times.

Miomir Kecmanovic is regarded as one of the brightest young talents in the game today. He is at a career high #39 in the rankings and won his maiden title at Kitzbuhel a few weeks ago. He struggled against Sumit Nagal in the first round, winning a nervy contest in three sets. He will have to be much better than that against Mannarino as the veteran will surely not let him off the hook as Nagal did. He is very solid from the baseline and will have to use his heavy groundstrokes to keep the Frenchman pinned back as he loves to take the ball early and take time away from his opponents.

Despite Mannarino being much more impressive in the opening round I am going with Kecmanovic to win this match. He has struggled for form after his Kitzbuhel title but I trust him more than the Frenchman these days and he is the better player at this stage in their careers. If he does not play well then Mannarino definitely has the quality to win but once he plays to his ability he should sail into the Quarterfinals. Miomir Kecmanovic to win.