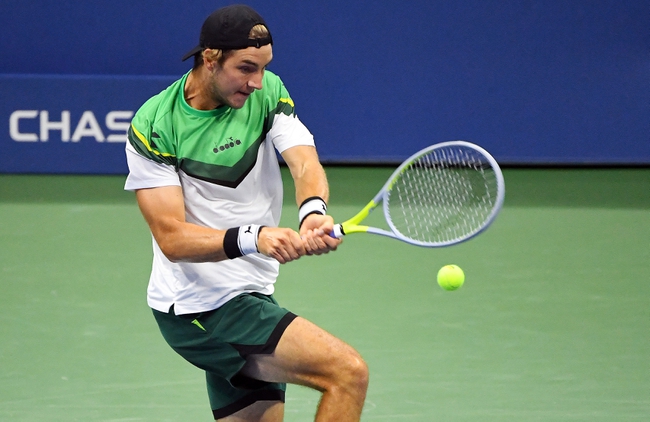 Jan-Lennard Struff vs. Yoshihito Nishioka - 2020 Cologne Championships Round of 16

Seventh seeded Jan-Lennard Struff of Germany faces Japan's Yoshihito Nishioka in the Round of 16 at the 2020 Cologne Championships in Germany. The match will take place on Thursday October 22nd, 2020 at approximately 1:20pm EST. The German leads the head to head by 1 match to 0 and will be hoping to extend that lead at home in Germany.

Jan-Lennard Struff is the German #2 and will be expecting a deep run here in Cologne. However he enters this tournament in relatively poor form, shockingly losing to Oscar Otte last week in the first Cologne Tournament. He was dominant in his First Round over the in-form Marco Cecchinato and will be hoping that this is a sign that his fortunes are changing. Struff possesses a huge game with a big serve and even bigger groundstrokes. He loves to sit back on the baseline and dictate play with his huge forehand. Where he tends to struggle is with consistency and focus which tend to go hand in hand. He is prone to meltdowns and will be hoping to keep it together against a very consistent opponent. He won over 80% of points on his first serve in Round One and will need that firepower in the Round of 16.

Yoshihito Nishioka is also ranked #2 in his country of Japan and will like his chances here after an impressive performance in his win over Kyle Edmund in Round One, beating him 6-4, 6-0. He is ultra-consistent and his lefty groundstrokes can cause a lot of issues to opponents. That being said, he lacks a major weapon which is why he struggles to beat the top players. He will be content to stay on the baseline and move Struff around, hoping to unsettle him and draw unforced errors. Like his opponent he enters this tournament in poor form and will be hoping to end it with a strong performance this week.

I am going to back Struff to win this match. He has had a rough time lately but he is too good of a player to not turn it around sometime. His serve is sure to cause Nishioka a lot of problems and he simply has too much firepower for the Japenese #2 to handle. It won't be easy but expect Struff to advance to the Quarterfinals. Jan-Lennard Struff to win.