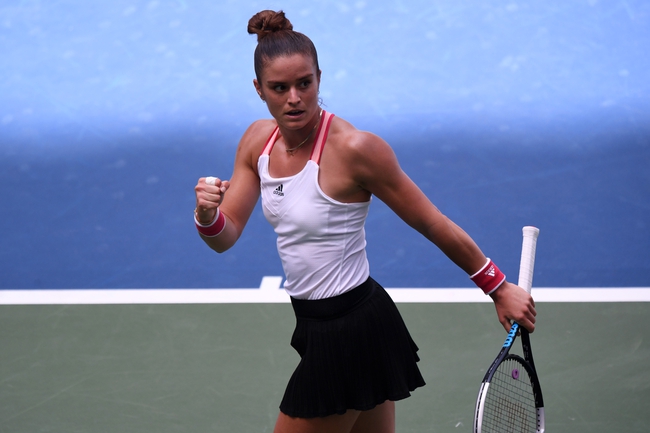 Tunisian Ons Jabeur faces Maria Sakkari of Greece in what is sure to be an exciting match at the 2020 Ostrava Open Quarterfinals. The match will take place on Friday October 23rd, 2020. There have been two previous matches between the two that were evenly split, but those were five years ago on clay, not giving us much insight. Sakkari is ranked slightly ahead of the Tunisian but Jabeur is in arguably better form so it should be a very close encounter. Who will advance to the Semi-Finals?

Ons Jabeur has had an outstanding year. In my opinion she is one of the most consistent players and hardly ever plays poor matches. She is solid as a rock and can vary her game very well, a rarity in the women's game today. In the matches that she has lost recently, she has simply been overpowered and the opponent had an amazing day. She has had some impressive wins over Barbara Strycova and Jelena Ostapenko to get to this point, and is yet to lose a set in the tournament. She has a solid all court game and is comfortable on either attack or defence. This bodes well for her chances against the sometimes erratic Sakkari.

Maria Sakkari is an extremely talented player and is ranked world number #23. She has also been impressive here in Ostrava and has defeated Kristyna Pliskova and Eva Svitolina to get to this point, both in straight sets. She was particularly impressive in her upset win over Svitolina, being extremely aggressive and creating numerous break opportunities. She is very adept on these indoor hard courts, boasting a 5-1 record after reaching the St. Petersburg Open Semifinals earlier in the year. Her strengths are her big serve and groundstrokes and if she can keep her errors to a minimum she can be very hard to beat.

This is a tough match to call but I am going with Maria Sakkari here. You know what you are going to get with Jabeur; very solid and consistent with a lot of variety. That being said, Sakkari is one of the most intelligent players on the tour in my opinion and she should be able to figure out how to beat her opponent. She has seemed in great form so far in Ostrava and I expect her to prevail in a close three setter. Maria Sakkari to win.

The pick in this article is the opinion of the writer, not a Sports Chat Place site consensus.
Previous Pick
Cologne Championships: Jan-Lennard Struff vs. Yoshihito Nishioka 10/22/20 Tennis Prediction
Next Pick
Antwerp Open: Ugo Humbert vs. Lloyd Harris 10/23/20 Tennis Prediction