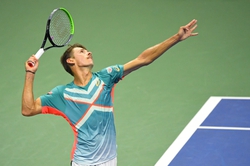 Alex De Minaur meets Grigor Dimitrov in the semifinals of the 2020 Antwerp Open on Saturday, October 24th 2020. Will it be the up and coming Alex De Minaur to make his 7th career final, or will Dimitrov use his experience and dominate this match?

Alex de Minaur absolutely destroyed Marcos Giron in the quarterfinals, beating the American 6-3/6-0. Giron played incredibly well in his second round match against David Goffin, winning in straight sets, but was not able to keep that level up and was hitting too many unforced errors against De Minaur. De Minaur was superb both on his serve and when returning, being able to move Giron around the court at ease and always picking up every ball. De Minaur is going to be a top 10 player in the next two years and I am sure these results are just the beginning of his long and successful career.

Grigor Dimitrov did not have to do anything to book his spot in this semifinal as he got his spot through a walkover against Milos Raonic who had to withdraw from the tournament due to an abdominal injury. Dimitrov is still very deserving of this spot in the semifinals as he put on an incredibly solid performance against Pablo Andujar in the second round. Will Dimitrov, however, have the necessary minutes under his belt to feel comfortable on these courts and be able to take the ball on with pace and accuracy? He better be on top of his game if he is to beat Alex De Minaur.

This is going to be second meeting between both players, with Grigor Dimitrov leading the head to head 1-0. The only time they met was at the 2019 US Open where Dimitrov won in straight sets. I think this is going to be a very different encounter as Dimitrov had to fight extremely hard to win his one and only match here in Antwerp, whilst De Minaur has consistently been performing solidly in his 3 matches. Dimitrov will of course have less strain on his body, however, he will also not be completely comfortable on these courts. This makes me believe that De Minaur will edge this.

The pick in this article is the opinion of the writer, not a Sports Chat Place site consensus.
Previous Pick
Cologne Championships: Felix Auger-Aliassime vs. Yoshihito Nishioka 10/23/20 Tennis Prediction
Next Pick
Antwerp Open: Daniel Evans vs. Ugo Humbert 10/24/20 Tennis Prediction