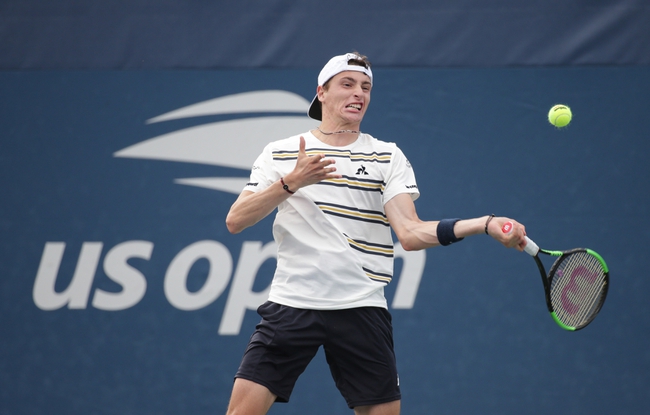 It is the final of the youngsters here in Antwerp as Alex de Minaur meets Ugo Humbert in the final on Sunday, October 25th 2020. Will it be the big swinging Frenchman, or the agile and versatile de Minaur to win the title in Belgium?

Ugo Humbert came through a very tough 3-set match on Saturday against Daniel Evans in which he lost the first set, and was down 6-3 in the second set tiebreak, but still managed to save 4 match points to win it 6-4 in the third. Humbert showed us his ability to maintain composure during the difficult moments on Saturday and he will need to demonstrate more of the same on Sunday as he meets a player who will continuously work you until you give up or can't handle it anymore. Humbert will need to ensure that his backhand errors diminish and his winners flourish in this final.

Alex De Minaur put on a solid performance against Grigor Dimitrov, winning also a very tight 3-set encounter, 7-6/6-7/6-4. Dimitrov was not on top of his game in the first set and de Minaur took advantage of it in the tiebreak, however then Dimitrov began to play well and was able to control the second set and win it. In the third set, both players were playing at an extremely high level, however, when it came to the big moments, de Minaur flourished. Alex was able to maintain the pressure on Dimitrov's backhand side and eventually this broke and allowed the Australian to move forward to the final.

This is going to be the first meeting between both players and it is going to be one to remember. Both of these players have played superbly here in Antwerp and both deserve the title. To pick a winner is hard, but we have to go for the player who has done this more consistently and shown us time and time again he can perform in big matches. This is of course Alex de Minaur. De Minaur has won 3 titles in his career and he knows how to play in big matches. I expect this to be a 3-setter, but one de Minaur should win.