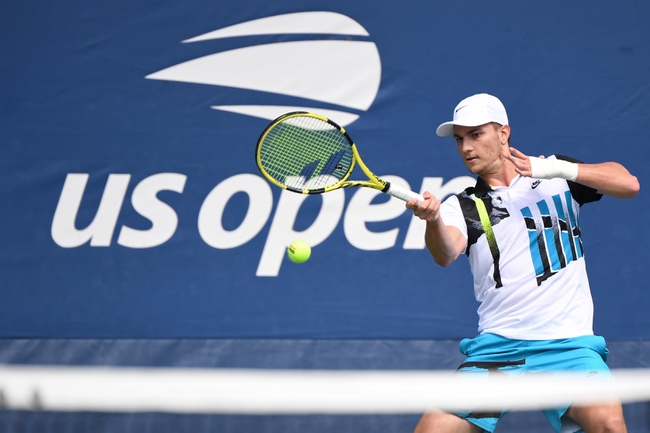 Frances Tiafoe came through a very easy first round encounter as he beat Corentin Moutet in straight sets 6-3/6-2. I thought this match was going to be a much tighter encounter, however, Tiafoe turned the engines on and absolutely dominated his French opponent. Tiafoe was able to remain consistent throughout the entirety of that match and he was able to show Moutet who was the better player. Tiafoe will now have to hope to do the same here against Miomir Kecmanovic in the second round as Kecmanovic is a very consistent baseline player who is not afraid to take the game to his opponents. Will Tiafoe maintain this consistency, or will the pressure play of Kecmanovic break him down?

Miomir Kecmanovic is one of the very promising up and coming players on the tour alongside the likes of Ugo Humbert. Kecmanovic has a very solid baseline game and he is able to move his opponents around consistently and win points by forcing his opponents to hit unforced errors. Kecmanovic has not played much on the indoor hard courts as of yet this year and perhaps he will take a little bit to acclimatise to the conditions and the speed of the ball, but once he is feeling goof on the court, it is going to be hard to stop him.

This is going to be the second meeting between both players, with Frances Tiafoe leading the head to head 1-0. I believe that if Tiafoe plays the way he did against Corentin Moutet, he will win this match. Tiafoe struggles with consistency, but the way he played in his opening round match and adding to that the fact that Kecmanovic has not played much on indoor hard courts this year, should give Tiafoe the slight advantage to win this match and book his spot in the quarterfinals.

The pick in this article is the opinion of the writer, not a Sports Chat Place site consensus.
Previous Pick
Vienna Open: Stan Wawrinka vs. Cristian Garin 10/27/20 Tennis Prediction
Next Pick
Astana Open: Fernando Verdasco vs. John Millman 10/28/20 Tennis Prediction