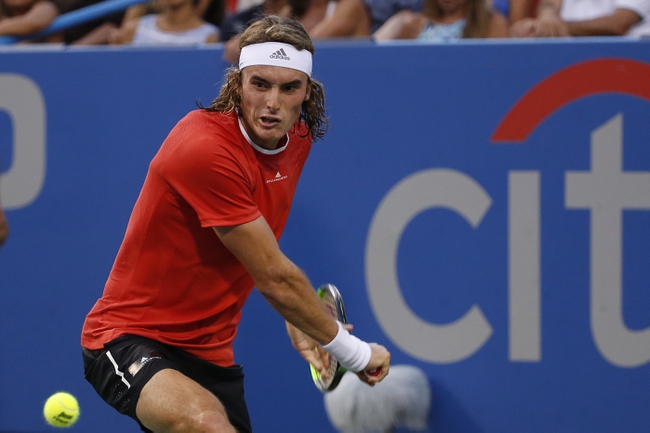 Stefanos Tsitsipas vs. Grigor Dimitrov - 2020 Vienna Open Round of 16

Third seeded Stefanos Tsitsipas of Greece faces Bulgarian Grigor Dimitrov in a blockbuster Round of 16 clash at the 2020 Vienna Open in Austria. The match will take place on Thursday October 29th, 2020 at 1:50pm EST. This is sure to be an intense match between current and former top 10 players. Tsitsipas leads the head to head by 1 match to 0, having won their only meeting at Roland Garros this year. They both looked good in their Opening Round wins, who will win this battle and advance to the Quarter-Finals?

Stefanos Tsitsipas has been one of the top players in the world for the past few years. At his young age, he is seen by many as one of the "heirs" to the throne once the "Big 3" retire. He arrives in Vienna in relatively good form, reaching the Final and Semi-Finals of his last two events, Hamburg and the French Open respectively. He came through a tough three setter against Jan-Lennard Struff in the First Round, displaying a very high level of tennis against an opponent that has beaten him twice in the past. He will be looking to use his big serve and dominant groundstrokes to gain an upper hand in this match.

His opponent Grigor Dimitrov was equally impressive in his Opening Round win over Karen Khachanov. The Bulgarian played some solid tennis, being a little aggressive than usual and taking time away from his big-hitting Russian opponent. Dimitrov has long been a top player that has fallen off over the past few years due to injury, but finally seems to be back in good form. He has recently cracked the top 20 again and will be looking to further climb up the rankings on a surface that he has had plenty of success on throughout his career with three titles.

I predict that this match will go the distance. The two players have similar aggressive styles and there will surely be a lot of short rallies in this match. I give the edge to Tsitsipas here as I think that his groundstrokes are a bit more penetrating, and he also has the better serve. Stefanos Tsitsipas to win in three sets.