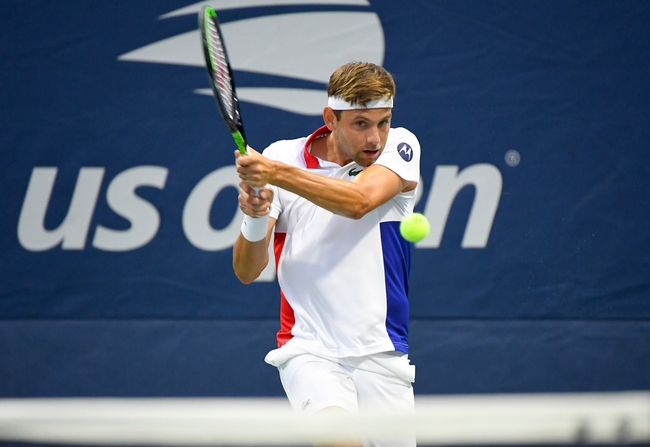 Filiip Krajinovic of Serbia faces 39 year old veteran Feliciano Lopez of Spain in the First Round of the 2020 Paris Masters. The match will take place on Monday November 2nd, 2020 at 6am. They have played once before with Krajinovic winning that match in straight sets in 2018. Neither player has been in the best of form lately but this is sure to be an exciting encounter. Who will advance to the Second Round?

Filip Krajinovic is ranked #30 in the world but has been in poor form lately. He has lost in the First Round in his past three tournaments but one of them was a close encounter against compatroit Novak Djokovic where he played well and had a set point in the first set. He has a very strong baseline game, with deep penetrating groundstrokes. His serve has been much improved and he will have to serve well here, as it will be difficult to break Lopez's serve which is still a big weapon. He is back in Paris where he has fond memories, as he reached the Final here in 2017 (losing to Jack Sock). He will be confident of victory here and will expect to have a strong showing.

Feliciano Lopez is one of the oldest players on the ATP Tour, but is still playing at a high level. He is currently ranked #63 in the world and arrives in Paris in mixed form. He has a 3-5 record since the Tour resumed including an impressive win over Tommy Paul in Antwerp. His serve is still a huge weapon and he rushes the net with every opportunity he gets which is sure to unsettle the Serbian. If Lopez serves well here then anything is possible but he certainly enters this match as the underdog.

I am going with Filip Krajinovic to win this match and advance to the Second Round. While Lopez is still a dangerous player, Krajinovic is hugely improved despite his recent struggles and will be too much for the veteran Spaniard to handle. I think the first set will be close but Krajinovic will eventually figure it out and run away with the victory in straight sets.