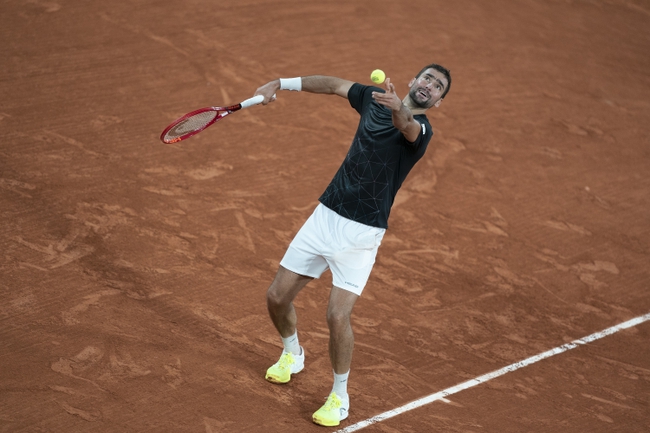 Marin Cilic meets the young Frenchman, Corentin Moutet, in the second round of the 2020 Paris Masters on Tuesday, November 3rd 2020. Will Moutet be able to shockingly come through another match here in Paris, or will Cilic dominate as he did against FAA in the first round?

Corentin Moutet fought for his life in his match against Salvatore Caruso, being absolutely destroyed in the first set, and in the second set looking absolutely terrible but still managing to save 8 break points and steal the set in a tiebreak. Moutet was not the better player yesterday, it was just he was able to play long enough to force errors out of Caruso. Moutet struggled with his breath after points as he complained the temperature was too heavy and he was not in his best form. If Moutet is to be strong in this encounter against Cilic, he will have to play 10x better than he did in the first round.

Marin Cilic absolutely destroyed Felix Auger-Aliassime in the first round, showing the young player that he still has lots to improve in his game. Cilic will know he played very well yesterday and he will be confident in his abilities to make it to the third round here in Paris. Cilic's serve and forehand were on fire and if he continues to play strong percentage tennis, opponents will find it tough to hit through him. Cilic will want to show the tennis world he is still a top player and this is going to be his last opportunity this year.

This is going to be the second meeting between both players, with Marin Cilic leading the head to head 1-0. I do not expect Corentin Moutet to come out with anything from this match as really he played poorly on Monday but was extremely lucky to come through. Cilic, on the other hand, was extremely solid and he will be very confident in his ability to win this match. Moutet will have to put on the performance of a lifetime if he is to get anything out of this match, and I do not expect him to do that.