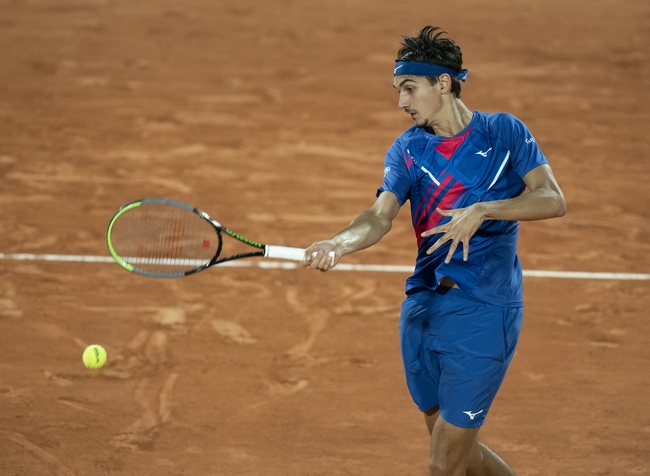 Lorenzo Sonego aims to continue his incredible run of form as he meets Alex de Minaur in the second round of the 2020 Paris Masters on Wednesday, November 4th 2020. Will Sonego be able to win against another solid opponent, or will de Minaur stop him in his tracks?

Alex de Minaur is looking to play much better after suffering a tough loss in the Final of the 2020 Antwerp Open where he lost in straight sets to the young Frenchman Ugo Humbert. Alex de Minaur has a very solid game, he is able to move his opponents around the court with ease, however what is missing from his game is his +1 shot. De Minaur needs to begin hitting more winners, because without them, especially on these indoor hard courts, it is hard to get far if you do not do that or develop that into your game.

Lorenzo Sonego has had the week of his lifetime, beating the world No.1 Novak Djokovic in the quarterfinals of the 2020 Vienna Open last week in straight sets, and then reaching the Final only to lose to Andrey Rublev who has been even more superb this year. Sonego will want to continue his superb run of form and he did just that by beating Alexander Bublik here in the first round, beating the Kazakh in straight sets and showing us he was not a one week wonder. However, Sonego now meets a much tougher opponent, will he be able to come through once again?

This is going to be the first meeting between both players and it is going to be a very tight one. If this was 2 weeks ago, I would've predicted Alex de Minaur without hesitation, however, now Lorenzo Sonego has had a superb week and he has a lot of momentum and confidence behind him. Both players can win this match, but if I have to go on individual form, it is hard to go against the man who beat Novak Djokovic in straight sets less than a week ago. I think Sonego edges this.