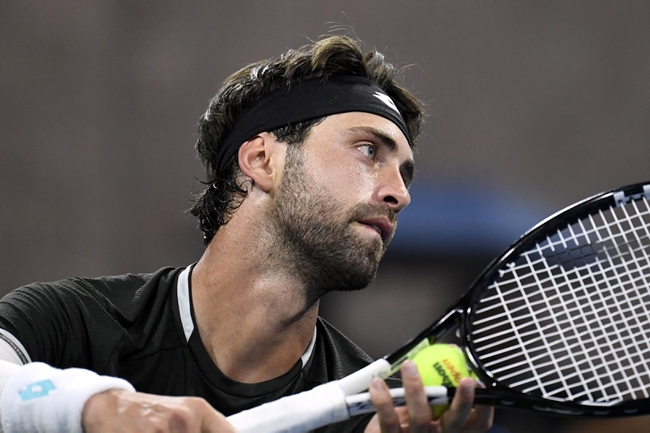 Seventh seeded Nikoloz Basilashvili of Georgia faces Italian Stefano Travaglia in the First Round of the 2020 Sofia Open in Bulgaria. The match will take place on Monday November 9th, 2020 at approximately 6:00am EST. The pair have played each other once before with Basilashvili claiming the win. Will the Italian even the score here?

Nikoloz Basilashvili has been having a miserable year in 2020. Once ranked in the top 20 at #16, he has dropped to #39 and has incredibly not won a match since the ATP Tour resumed in July. He has lost in the First Round in 8 tournaments in a row and will be desperate to end his season on a positive note with a few wins here. Unfortunately for him, he has not traditionally had much success on indoor hard courts so he faces an uphill battle. His powerful groundstrokes are still huge weapons, but he has been extremely erratic of late and will have to be at his best to come away with the victory here.

Stefano Travaglia is currently ranked 74 and has been having a mixed season so far. He had some good results during the clay court swing, as that is his preferred surface and has had much success at the Challenger level. However, he has struggled on the hard courts, losing in the First Round in his past three tournaments. He is very strong from the baseline but doesn't have any real weapons other than his consistency. He will struggle on this type of surface against big hitters, and his opponent certainly falls in that category.

This is a tough match to call. Basilashvili should be the clear favorite here but with his shocking form it is hard to side with him on any surface. Travaglia has had the better season but has struggled on this surface. All things considered, I am going to side with the Georgian to turn his season around and claim his first win since July. It won't be pretty but he has enough experience to take advantage here and will come away with a very hard fought win.

The pick in this article is the opinion of the writer, not a Sports Chat Place site consensus.
Previous Pick
Paris Masters: Daniil Medvedev vs. Alexander Zverev 11/08/20 Tennis Prediction
Next Pick
Sofia Open: Adrian Mannarino vs. Martin Klizan 11/09/20 Tennis Prediction