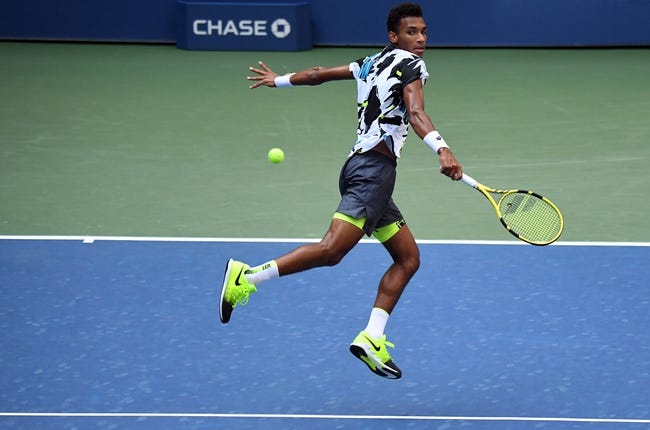 Felix Auger-Aliassime vs. Sebastian Korda - 2021 Acapulco Open Round of 16

Seventh seeded Canadian Felix-Auger Aliassime faces unseeded Sebastian Korda of the United States in the Round of 16 at the 2021 Acapulco Open. The match is scheduled to be played on Wednesday March 17th, 2021 at 8:00pm EST.

Who will win the battle of the young prodigies? This match is sure to be a very entertaining one between two of the best young prospects on the ATP Tour. They are both in good form in 2021, who will advance to the Quarter-Finals here at the 2021 Acapulco Open?

Felix Auger-Aliassime is currently ranked #18 in the world and has long been considered a future top 5 player. While he has had a lot of success so far, reaching 7 ATP Finals, he is still waiting on his maiden title. The young Canadian has a huge serve and powerful baseline game, but can be inconsistent at times. He was outstanding in his First Round win over Tennys Sandgren, 6-3, 7-6. FAA served very well, not allowing Sandgren to get into a rhythm. He enters this match against Sebastian Korda as the favorite, and his experience will put him in a good position to advance here at the 2021 Acapulco Open.

Sebastian Korda is the son of former Australian Open Champion Petr Korda and is a very highly-rated young player on the ATP Tour. He has been enjoying a breakout year in 2021, winning two Challenger Titles and reaching his maiden ATP Tour Final in Delray Beach. He is now ranked a career-high #88 in the world, and will have his sights set on breaking into the top 50 sooner rather than later. He has a similar game style to his opponent, dominating his opponent from the baseline with his big serve and groundstrokes. He is extremely confident heading into this match, having just defeated former top 5 player Marin Cilic in the First Round.

While Korda is an exciting prospect, he is not quite ready to compete with someone of FAA’s level. I have no doubt that he has a big future in the game, but FAA has a lot of experience despite his young age, and should be well-equipped to win here. Felix Auger-Aliassime to win in two tight sets.