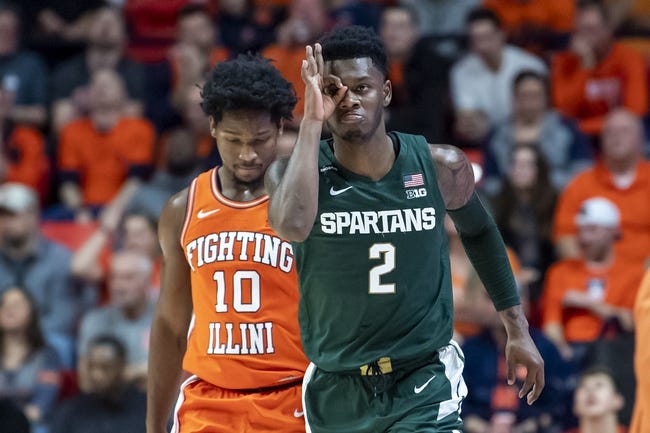 Illinois enters this one at 16-5 so far. The Illini are riding a seven-game win streak most recently taking out Minnesota. As for Michigan State, they’re 11-9 this year. The Spartans are 1-2 in their last three games and coming off a win over Indiana. Check back all season long for free college basketball picks at Sports Chat Place.

Illinois has had a pretty solid season so far, and they’ve only lost consecutive games once to Maryland and Ohio State. Since then the Illini have beaten Penn State, Iowa, Indiana, Wisconsin, Nebraska, Northwestern and Minnesota over their last seven.

In the 94-63 win over Minnesota on Saturday, Illinois’ Kofi Cockburn put up 22 points with six rebounds. Ayo Dosunmu posted a triple-double on 19 points with 10 rebounds and 10 assists, and Trent Frazier chipped in 15 points with four assists and three boards.

Over on the Michigan State side, they opened the year at 6-0 but then lost seven of their next nine games. Since then the Spartans are 3-2 with losses to Iowa and Purdue alongside wins over Nebraska, Penn State and Indiana.

In the 78-71 win over Indiana on Saturday, Michigan State’s Aaron Henry led the way on 27 points with five rebounds and two assists. Both Joshua Langford and Gabe Brown added 14 points apiece, combining for 10 rebounds and five assists as well.

PICK: I’m going to stick with Illinois. Michigan State posted a great game versus Indiana in their last outing, but prior to that they’d posted 66 or fewer points in four straight games. Illinois is simply on a tear right now with 73 or more points in each of their last eight games. This one may be close initially but I like the Illini to pull away on a cover.