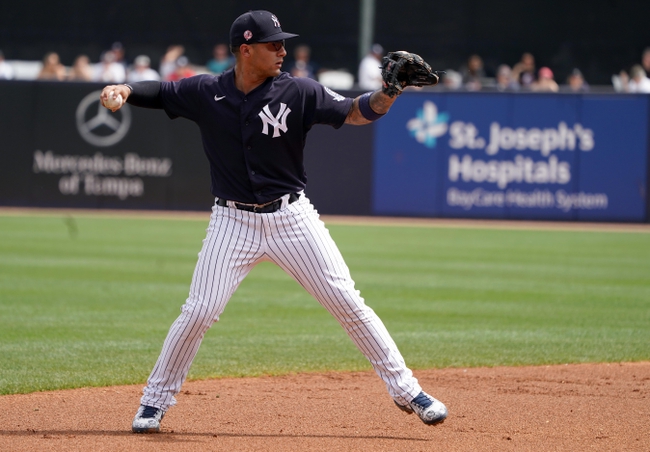 The New York Yankees enter the 2020 MLB season as the odds-on favorites to take the American League pennant.

The Yankees managed a 103-59 record in 2019, winning the AL East for the first time since 2012. New York would go on to the AL Championship, where they lost to the Astros. In 2020, the Yankees are thinking World Series championship, and anything less would be a disappointment. Check back all season long for free MLB picks and MLB predictions at Sports Chat Place.

Let’s take a closer look at the Yankees’ current status and break down their chances at hitting their projected win total this season.

New York finished a comfortable seven games ahead of a talented Rays team to take the AL East in 2019. The Yankees did well in their divisional games for the most part, trouncing Baltimore (17-2) and Boston (14-5) significantly in their respective season series. That said, New York did have their issues with a few AL teams elsewhere, posting a sketchy 3-4 record versus Cleveland, the White Sox and Houston. Most of that can be explained away with lineup changes (the Yankees had a ton of injuries all year) and the like, but it’s still worth considering.

In any case, things are looking up for New York heading into the shortened 2020 MLB season. If there’s one good thing to be had for the Yankees with the long layoff, it’s that the roster has had a chance to get healthy. Most notably, star slugger Aaron Judge has been struggling with rib and collapsed lung issues since late last season, and he’s reportedly near a return. Pitcher James Paxton and outfielders Giancarlo Stanton and Aaron Hicks wouldn’t have been able to return for a normal season, but that trio should be ready to go now. Veteran pitcher Masahiro Tanaka’s scary head injury during on-field workouts was a frightening sight, but his tests came back clean and he should be okay, thankfully.

New York boasts a talented young infield once again in 2020. Across a 60-game season, guys like Gleyber Torres, DJ LeMahieu, Gary Sanchez, Giovanny Urshela and Luke Voit all have the capability of putting up double-digit home runs and 50-plus hits. Torres in particular will be a notable name to watch after a breakout season in 2019 that featured 38 homers, 90 RBIs and 96 runs.

On paper, the Yankees still boast a great bullpen highlighted by closer Aroldis Chapman, who posted a 2.21 ERA and 37 saves over 57.0 innings last season. As for the projected starting rotation—assuming Paxton and Tanaka are good to go—it’s pretty solid as well. Gerrit Cole will in all likelihood be the No. 1 guy after a 3.08 ERA and 105 Ks last year. Jordan Montgomery and Jonathan Loaisiga could slot into starting positions over the course of the season. All in all, there's some pretty good depth there.

Pick: I’m going over. It’s something of a stretch; realistically speaking we’re deciding on whether or not the Yankees will win 2/3 of their games in an unprecedented, shortened and very up-in-the-air baseball campaign. There are plenty of things that could go wrong with injuries, coronavirus infections or just plain bad play. Tampa Bay has a talented young team that could potentially throw a wrench into the Yankees' division championship aspirations as well.

That said, I think there’s more than enough talent on the New York roster to carry the team through a weird season. The Yanks should be a fun team to watch in 2020.

The pick in this article is the opinion of the writer, not a Sports Chat Place site consensus.
Previous Pick
Cincinnati Reds Shortened MLB Season Pick, Odds and Prediction
Next Pick
LG Twins vs. Doosan Bears - 7/7/20 KBO Baseball Pick, Odds, and Prediction