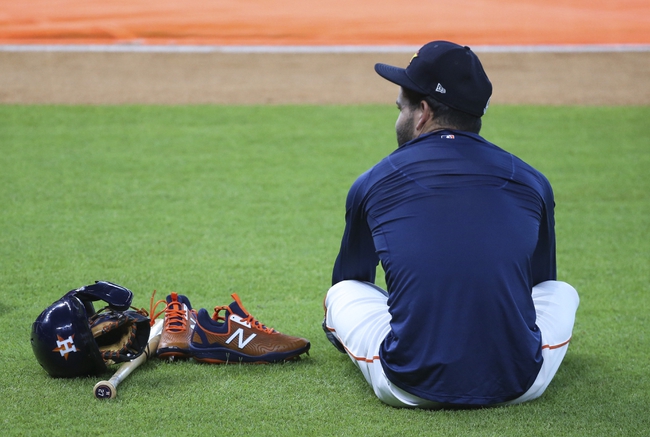 The Houston Astros are on a mission to repeat as American League champions in the 2020 MLB season.

Houston managed their third straight 100-win season in 2019, going 107-55. The Astros made it all the way to Game 7 of the World Series before being eliminated by the Nationals. In 2020 Houston is thinking World Series again, and anything less would be considered a disappointment. Check back all season long for free MLB picks and MLB predictions at Sports Chat Place.

Let's take a closer look at Houston's current status and break down the team's chances at hitting their projected win total this season.

On paper, there’s not much to complain about when it comes to Houston’s 2019 season. Granted, we could speculate all day on the sign-stealing scenarios and timelines, but the numbers are still there unless the league says otherwise. Those numbers are pretty darn impressive too. Last year, Houston put up dominating efforts in season series versus teams like the Angels (14-5), Mariners (18-1) and Rangers (13-6). The Astros also held their own against tougher American League teams like the Yankees (4-3), Indians (4-3) and Red Sox (4-2). If not for a handful of “woulda coulda shoulda” plays across the World Series, Houston would be the proud owners of another championship.

On to 2020, and the Astros begin their campaign with renewed hope. During this shortened season, Houston will match up in 40 games versus their usual AL West opponents—10 games each versus the A’s, Rangers, Angels and Mariners. The Astros’ remaining 20 games will be versus the NL West, which features the Dodgers juggernaut, a pretty solid Diamondbacks squad and not a whole lot else. LA, Arizona and Oakland are likely the only teams that would give the Astros any consistent issues finding victories. That’s good news for Houston’s lofty playoff aspirations this season. Not to mention the over on their win total.

The Astros boast a loaded lineup once again heading into 2020. There’s plenty of power to go around, as George Springer, Jose Altuve, Alex Bregman, Yuli Gurriel, Yordan Alvarez, Carlos Correa and maybe even Michael Brantley each have enough power capability to notch double-digit home runs in the shortened 60-game season. Everyone in the projected lineup has a trained eye and the potential for some great OBP numbers. Rest assured, Houston will be scoring this season. A lot.

If there’s one sketchy area on paper for the Astros, it’s with their starting rotation. Veteran Zack Greinke is back after a 3.02 ERA and an 8-1 record over 62.2 innings last season, and Justin Verlander appears fully recovered after his March groin surgery. Lance McCullers should be the No. 3, then the waters start to get muddy. Provided all goes according to plan, Jose Urquidy and Josh James (or maybe Austin Pruitt) would probably slot in after that.

Pick: I’m going over. This one is pretty tight, as the Astros have one of the highest projected win totals in the league, but I think it’s still valid. Considering the amount of talented bats in the lineup, and considering there are only a few scary teams on the schedule, I think it’s feasible for Houston to hit 36 wins. Even if the back end of the rotation isn’t completely on point, the Astros bats will carry the team to several victories they may not otherwise have gotten. When the dust settles after the 60-game season, Houston should be atop the AL West once again.

The pick in this article is the opinion of the writer, not a Sports Chat Place site consensus.
Previous Pick
LG Twins vs. Doosan Bears - 7/8/20 KBO Baseball Pick, Odds, and Prediction
Next Pick
Atlanta Braves Shortened MLB Season Pick, Odds and Prediction