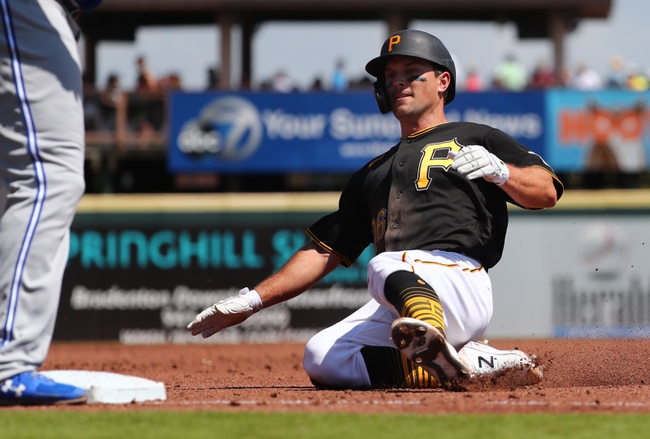 The Pittsburgh Pirates have a very difficult road ahead in the shortened 2020 MLB season.

Pittsburgh is coming off an ugly year in 2019, going 69-93 overall and finishing last in the National League Central. In a stacked division once again this season, the Pirates may see a rough time showing some improvement in the win percentage column. Check back all season long for free MLB picks and MLB predictions at Sports Chat Place.

Let’s take a closer look at Pittsburgh’s current status and break down the team’s chances at hitting their projected win total this season.

Needless to say, the Pirates’ results last year left a lot to be desired. Pittsburgh finished a whopping 22 games behind St. Louis for the NL Central lead, and six behind Cincinnati for fourth place. Although there were a few decent results in some of the NL season series, the Pirates faltered heavily against better competition in general, going 1-6 versus the Diamondbacks, 2-5 versus the Braves, 0-6 versus the Dodgers, and so on. Pittsburgh only came out on top in five NL season series the entire year.

The Pirates get a heavy 40-game division slate in 2020 versus the Cardinals, Cubs, Reds and Brewers (10 games each), and will also have games versus the AL Central. Realistically that’s not such a bad draw for Pittsburgh. That division boasts a couple of intimidating teams in the Twins and Indians, but the White Sox, Royals and Tigers are more manageable. The NL Central games will obviously be more important and difficult, as each of the other four teams should be pretty darn good in 2020.

Lineup-wise, Pittsburgh isn’t exactly a stacked squad, but there are a few bright spots here. Gregory Polanco and Josh Bell have double-digit homer capabilities, while Adam Frazier and Bryan Reynolds should be good for around 30 runs apiece if all goes well. Jarrod Dyson also has plenty of steal speed—if he can keep that batting average and OBP up during the course of the season, that is.

Then there’s the starting rotation, which could be a point of weakness for the Pirates in 2020. Joe Musgrove is the No. 1 guy after a 4.44 ERA and an 11-12 record in 31 starts and 170.1 innings last year, and Trevor Williams will slot in somewhere as well. Mitch Keller and Derek Holland will make up two of the other three spots, and the final position will probably feature some combination of Steven Brault and Chad Kuhl. Honestly it’s not the strongest-looking pitching staff, as none of those guys projects an ERA under 4.00 or so.

Pick: This one’s tough, but I’m going under. Pittsburgh had some pretty decent stretches and flashes of something better at times during 2019, but generally speaking the season was a loss. The Pirates will rack up some wins against bad AL Central teams like Detroit or KC, but when it comes to games in their own division things could get messy. The Cardinals, Cubs and Brewers have been perennially solid lately, and the Reds are a trendy pick to take the division after a ton of improvement this winter. That doesn’t leave a lot of meat on the bone for Pittsburgh; I’m thinking they’ll fall just shy of the projection.

The pick in this article is the opinion of the writer, not a Sports Chat Place site consensus.
Previous Pick
Atlanta Braves Shortened MLB Season Pick, Odds and Prediction
Next Pick
LG Twins vs. Doosan Bears - 7/9/20 KBO Baseball Pick, Odds, and Prediction